Whether drawing from photographic reference or from life, we can easily adopt what I call a line-by-line approach to drawing. We look at our subject, observe, draw a line or two, look again, draw another few lines, and slowly build the drawing. Although striving for accuracy, we come to an end result that is somewhat flat and uninteresting.

What did we miss by focusing on getting the contour lines right? We missed the gesture and structure.

I don’t want to get too “academic” in presenting the concept of structural syntax, but it’s an important principle to understand if you want to give life to your drawings.

What is drawing syntax?

Syntax is most often used as it relates to written language. Since drawing is a visual language, it applies there also.

Syntax is the order or sequence in which a structure is constructed. So in design and art, it relates to how we create things in proper order and position so that the whole creation makes sense. The final drawing or artwork is created by building one thing upon another, line by line, shape by shape. If you understand that some things must come first in order to support other things in a design, it makes sense to think syntactically.

Why is syntax important in drawing, design and art?

Drawing is an observational activity requiring attention to detail and awareness of the entire drawing (or design). While you don’t have to begin with core structures when you draw, you should be aware of how the forms (the objects or subjects you’re drawing) are structured and how they relate to each other. You need to represent the movement and direction of the form. And you need to acknowledge the parts of the form that you cannot see from where you’re sitting, so that as you draw what you can see, it feels connected to the part you can’t see.

Syntax is also important to “ground” a form in space. How does the form relate to the space around it? How does the space support and frame the form.

We can easily be so eager to get to the details and contours that describe form that we forget to hang them on something. We’ll go right for the details and overlook gesture and structure. In doing this, we’ll end up with something that’s lifeless, although accurate.

How do we draw with syntax in mind?

Gesture describes movement and direction. Without structure and gesture, our drawings have no energy.

Structure is the combination of forms on which we “flesh out” the form. It’s what we hang the details on.

In gesture, you’re forced to look at the entire figure at once. You can’t pick a contour and follow it along when you’re drawing gestures. Because they’re quick impressions, you have to move fast to capture the essential idea of movement and attitude. 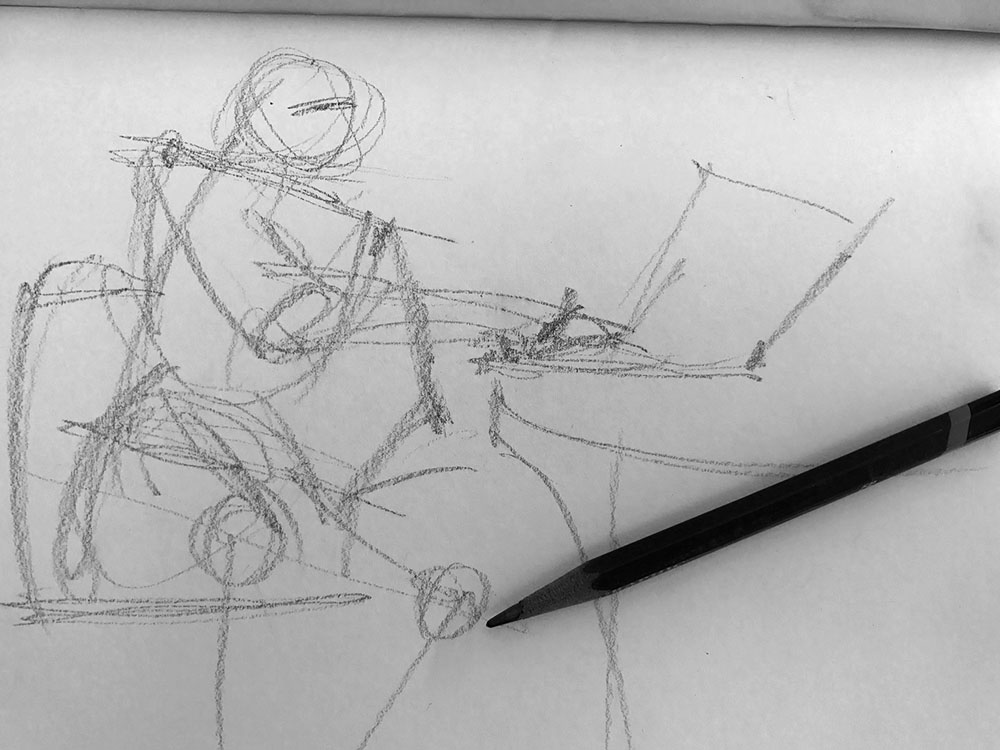 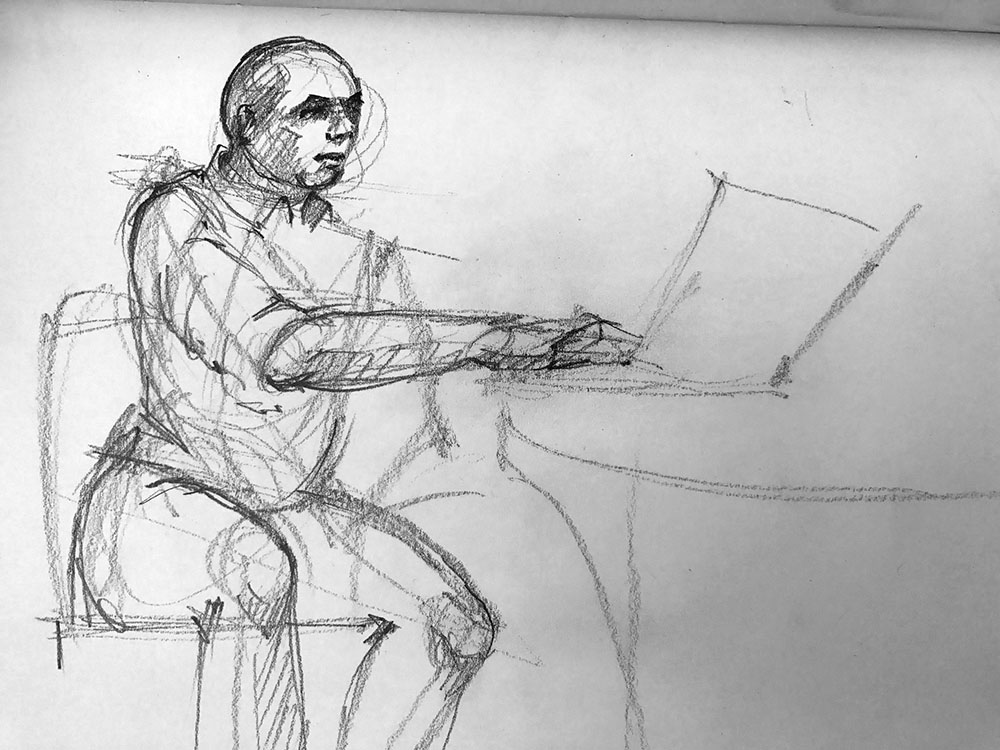 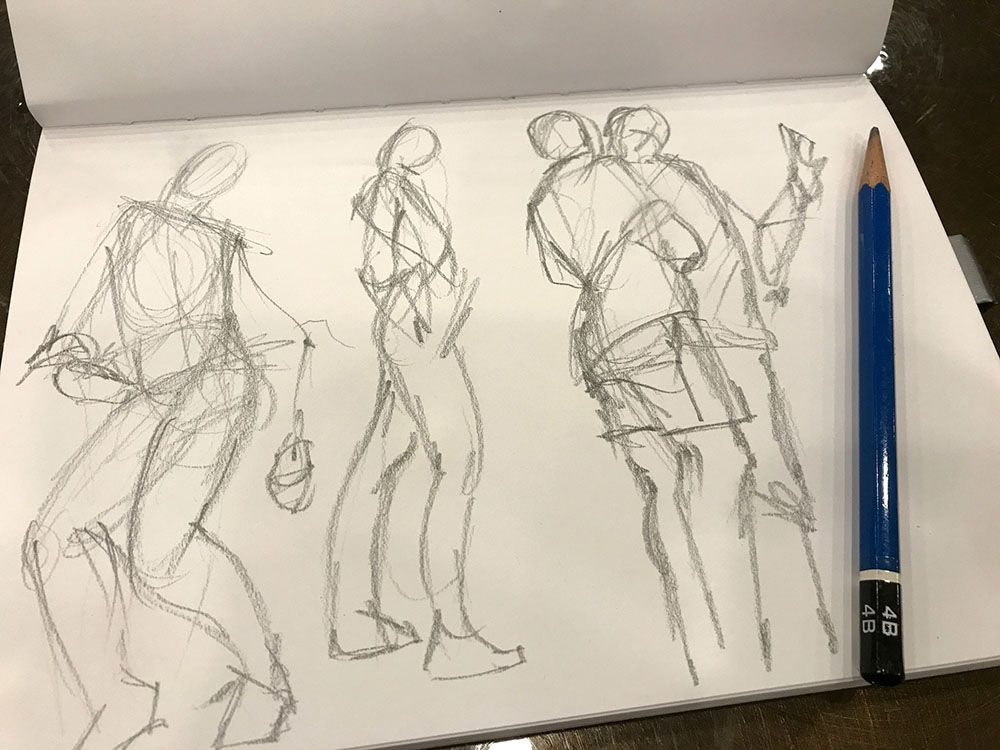 Use structural syntax to approach animate and inanimate forms alike: 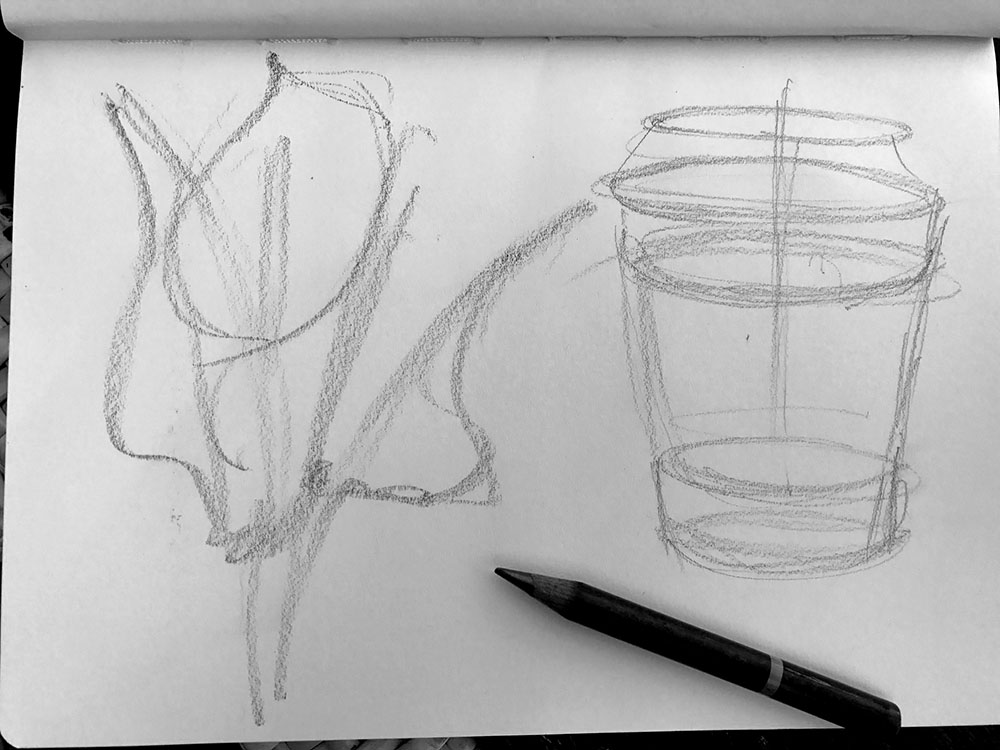 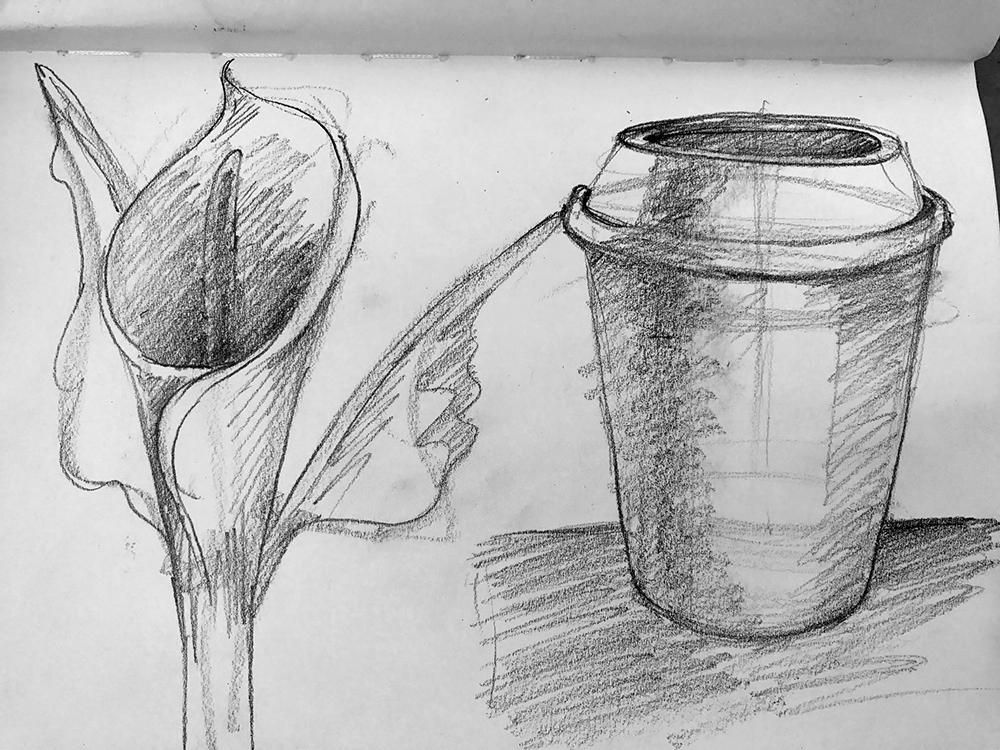 Gesture drawing forces you to look at the whole form. Since you’re not concerned with details, you won’t lose sight of proportion, scale, shape and position.

Try this sketchbook assignment. Turn on your TV, stream a video, or go to a public place where people are moving about.Sketch gestures of people, animals and objects. You’ll need to sketch quickly, and that’s the point — you won’t have time to add detail. Draw from the core of the form outward in order to capture the energy and movement of what you see. Try to draw as many as 30 30-second gesture sketches. Don’t worry about details. Get the movement right.