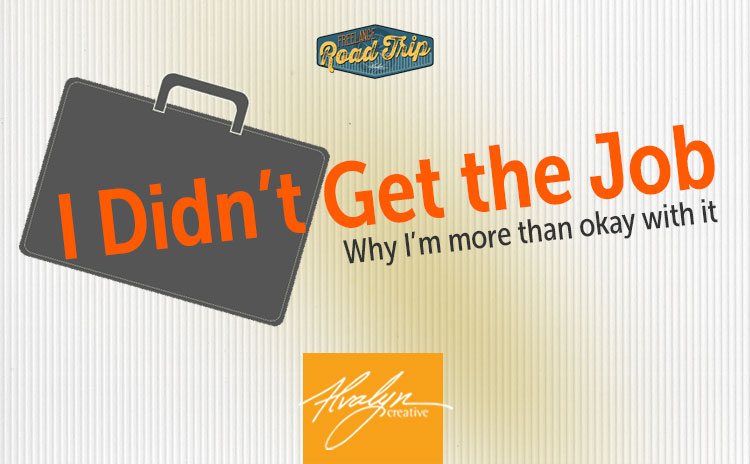 I Didn’t Get the Job

When you’re in business for yourself and you are regularly seeking new clients and projects, you will come across all types of prospects in your search. Some you will probably remember well, but not because things went well. This is an account of one initial consultation I had, and in hindsight, I was happy to not have been awarded the project. I will, however, always remember this meeting.

The prospective client had been referred by a colleague who I have a good relationship with. The prospect contacted me to schedule the appointment at a conveniently-located coffee shop. When I arrived, just a couple minutes prior to our meeting time, the prospect was not there. But I discovered that she had also scheduled with another designer, who had arrived early for a meeting 45 minutes after ours was scheduled to begin. We made our introductions and sat at separate tables to await the prospective client.

Be wary of a lack of professionalism.

The prospect arrived more than 45 minutes after our scheduled appointment time. She had made no effort to phone or text me to let me know she was going to be late. She arrived just as I was preparing to leave, so I stuck around to take the meeting. The other designer also stuck around, and moved to a chair across the room.

The prospect sat down across the table from me with no apology, and little in the way of greeting. She was dressed in workout clothes, and her hair appeared to have been wind-swept.  She was the executive director and founder of a professional women’s organization, which needed to improve its visual communications and brand  message. It was not a good start, I thought.

In presenting her organization’s needs, the prospect mentioned more than once that she had worked with designers who were unable to provide what she wanted. After reviewing my work, she asked me to create 3 samples showing how I would approach her project.

Be careful of requests for speculative work.

Since it is not my policy to engage in speculative work without compensation, I told her I’d be happy to generate a number of concepts for a reasonable fee before she made a decision to proceed with the full project. She said she would get back to me on that, and ended the meeting. I gathered my book and, giving the other designer my best set of raised eyebrows, made my exit.

In the days that followed, I made several follow-up attempts via email and phone. Once I was able to connect, almost 2 weeks later, the prospect informed that, although she appreciated my good business practices in declining to do spec work for free, she deemed me cocky for declining to do the spec work for her. Her stated reason was that she didn’t trust me of being capable of providing what she wanted. Side note on this: I had carefully edited my portfolio to include previous work done for professional trade associations similar to her organization. My ability was clearly demonstrated.

Ah, but I had offered to do the speculative work for an agreed-upon fee. I was not unwilling to create a concepts to help her make a decision. It is against my policy to provide that kind of value without receiving value in return. It was not an issue of my ability or unwillingness, but of her unwillingness to return value for value.

First impressions happen on both sides of the table.

Everyone considering working with a designer needs to realize that, just as they are evaluating the designer, the designer is, in turn, evaluating them. Interviews and go-sees go both ways. Independent creative professionals have a choice in who they work with, as much as businesses and organizations can choose what designer to work with. It is as important for a prospective client to be someone the creative wants to work with as it is for the creative to be someone the client wants to work with.

My post-meeting evaluation of this prospect revealed a number of red flags:

She was very late to a meeting that she had initiated. This was an indication she had no respect for my time.

She spoke disparagingly of designers she had previously worked with.

She wanted me to prove value to her without offering value in return. My experience, expertise, portfolio and client list were meaningless. She was unable to connect the proven success of my previous projects with my ability to succeed with hers.

She focused the project criteria on her personal taste rather than on what the organization actually needed. She was concerned that the design suited her instead of what was best for the customer base.

She was not open to exploring different approaches or ideas.

She sent no post-meeting follow-up, thank you or acknowledgement. Relationship was not important.

Having “respect” for good business practices while describing me as being “cocky” for maintaining those practices is inconsistent.

My recommendation to my fellow freelancers is to be attentive to body language, eye contact, tone of voice and general demeanor any time you are meeting a prospective client for the first time. Don’t be eager to please. There was a time when I would have agreed to do spec work in hope of getting the job. But I’ve been burned enough, and have heard enough stories, that I now approach with caution, even when the prospect is referred by an excellent client.

Not every prospect is going to make a good client and not every project is worth the effort. How the client presents himself or herself in your first consultation is usually a good indicator of how the working relationship will go. It is wise to think twice before pursuing or accepting a client when red flags appear during your first encounter.

I’m always a bit disappointed when I’m not awarded a project. But looking at this particular offering objectively, I have to acknowledge it can be a blessing to not get the job.

Have you been asked to prove your ability by doing spec work? Is there a client or project you should not have accepted, but did? How did it turn out? What did you learn? Share your insights in the comments.