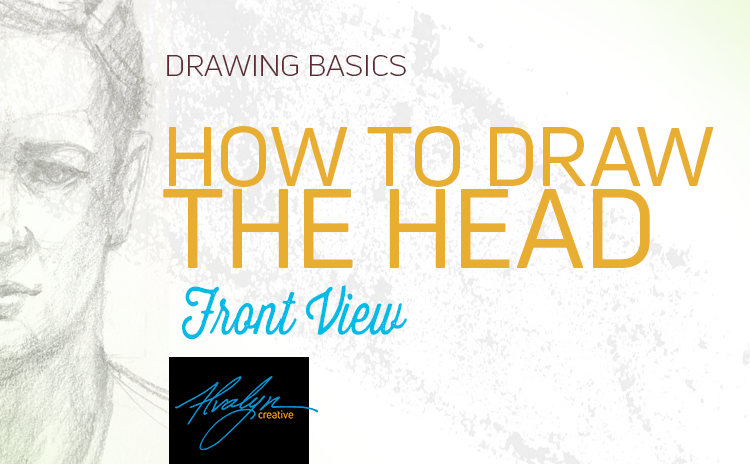 Beginning with the basic structure and proportions, here’s one approach to draw the head in a front view. You can apply these principles and steps in your own drawing practice.

This approach is not the only way to do it. But if you’re a beginner, following the steps of establishing the structure and proportion will help you understand the form and its component shapes so that you can fit them together to create the whole. You can also use this approach when drawing a likeness from models or photographs.

If you persist, eventually you won’t need to work structure-first, but will be able to draw accurately from reference or your imagination in a more free-form manner.

The proportions I describe below are to be used as general guides. As you draw, look for individual differences in shape and proportion.

1. Begin with a circle representing the top of the head. Add a smaller circle below the first.  Develop an “egg” shape including the jaw line. Generally, at its widest point, the width-to-length ratio of the head is 2:3.

3. The ears begin at the eye line and rise to the brow at their highest point. The lobes at the bottom of the ears insert or end at the level of the base of the nose. The neck inserts where the ears and jaw meet. Be careful not to draw the neck too thin. It has to be wide enough to support the weight of the head. Notice how I’ve flattened the sides of the original circle from Step 1.

4. Add the hairline, which is lower than the top of the head even when the person is bald or shaved. You’ll use the hairline to figure out proportions of the face.

The opening of the mouth is generally the vertical halfway point between the nose and the jaw.

Generally, the eye is one-fifth the width of the head. Divide the eye line into five equal parts and draw the iris/pupil of the eye in the second and fourth sections. The width of the nose varies, but you can lightly indicate it as the width of the center fifth.
Draw a short line where the bottom of the lower lip is located.

5. Divide the side planes of the head from the front. These planes give your portrait the dimensional illusion it needs.

7. Develop the eyes. The upper lid will cover the top of the iris. Observe whether the eye lid is angled, straight or rounded. Is the fold visible? Is the eye narrower toward the nose or on the outside?

Lay in some shadows to separate the bridge of the nose from the brow. This area above the nose and between the brows is called the glabella. Observe carefully how it’s shaped.

Add shadows to separate the upper and lower lips.

8. The eye brows wrap around the brow ridge. Be careful with their angles and shapes.

9. Add some hair, if present. Indicate hair not by drawing individual strands but by indicating planes — light and shadow shapes.

10. Develop light and dark areas to describe the planes of the head and face. Follow the side plane boundaries that you set up in Step 5.

Notice how I drew the folds of the ears. These are indicated with a few lines.

11. Add more details to the light and shadow separations. As you build tone, most of the preliminary shapes and landmarks will disappear underneath the tones.

12. The finished portrait sketch. The overall size of this is about 4 inches square, drawn in my sketchbook.

How To Design A Drawing

How To Draw A Hand

Drawing Tip: The Ears Are Pivotal

Every penny will go a long way in helping me continue my mission of teaching and training designers, artists, and creative freelancers.