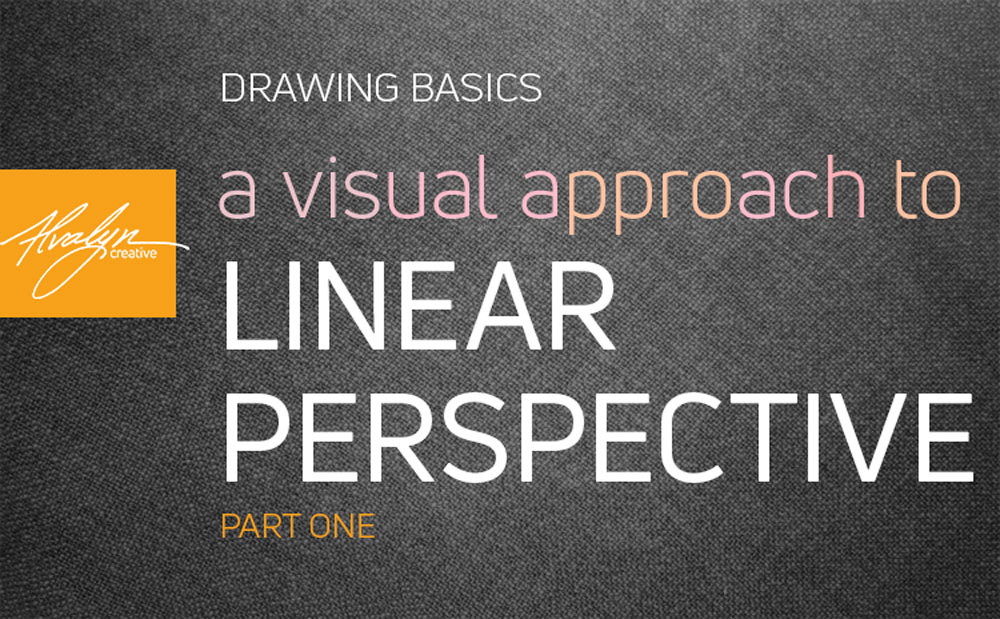 This is the first of a series of tutorial articles dealing with linear perspective. Read Part Two here. And there there’s Part Three.

I’m taking a visual approach to a technical topic and focusing on drawing from direct observation and from the imagination.

The principles of linear perspective are based on how we actually see objects and environments around us. Linear perspective is a Western understanding. Principles of diminishment — the reduced scale of objects at a distance and converging parallel planes, eye level, object points, and eyeballing angles and distances — were described during the Renaissance. I don’t say developed, because we’ve always seen this way. The principles describe the way things actually are.

First, some background. Perspective is optical drawing in that it describes how we actually see things.We see in points, not in planes. While we deal with concepts of visual planes, conceptual planes and actual planes, we really focus only on one thing at a time. This is why our eyes are constantly moving throughout our visual field.

In reality, there is too much visual information going on in our visual fields to see everything at once. So we edit. This relates to us seeing point by point, shifting focus from on thing to another. But it also relates to what we see. We will tend to overlook quite a bit of what’s in front of us and focus instead on what we think is important.

In drawing, painting and photography, we focus on the things we think are important, and exclude the rest. This exclusion is known as editing, and takes place as we’re observing. What’s important is what gets included in our images.

Linear perspective is not the only way to represent objects and spaces, and it’s not alway the most useful method. When drawings need to communicate technical information, using isometric projections is a clearer way to depict things. From a linear perspective point of view, projection drawings appear distorted and spaces and objects warped.

For narrative illustration, visual development and architectural renderings, linear perspective is the most appropriate method because is communicates concepts and stories most accurately.

To get you going on the right track with linear perspective, here are some definitions you need to know:

Point of View
The angle at which we see an object or space. Three-dimensional objects require multiple points of view when drawn in order to fully understand their form.

Station Point
The position of the viewer in relation to the picture plane and what’s in it. 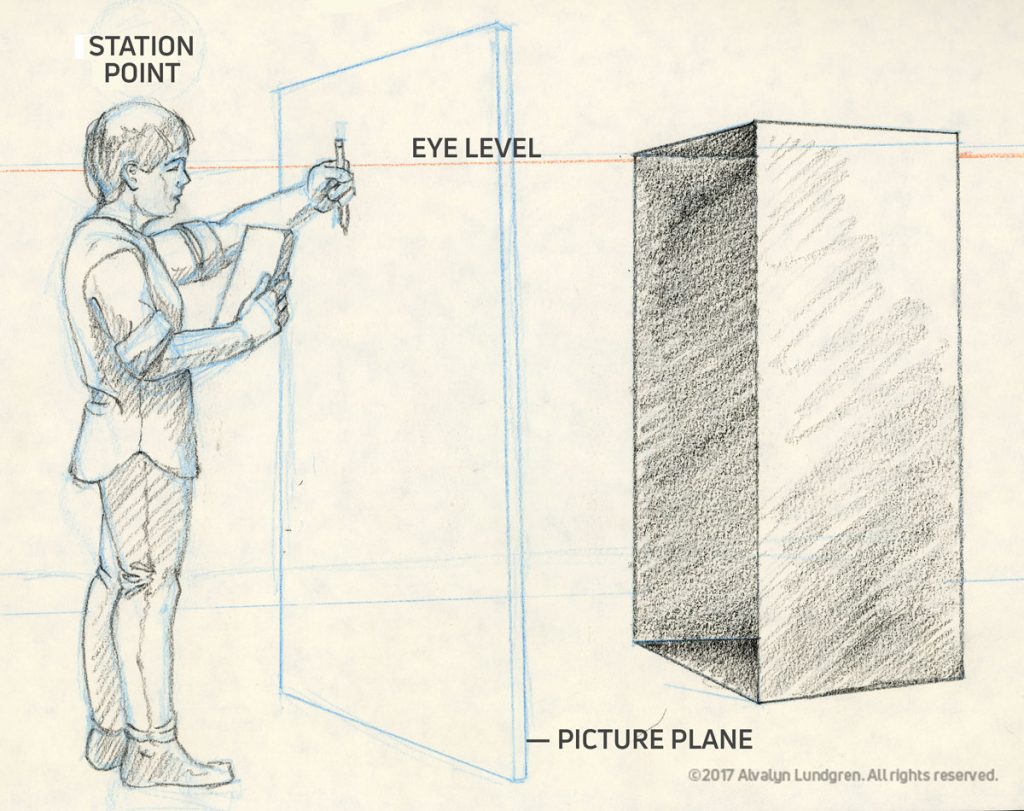 Line of Sight
The direction you’re looking. The relationship between you or the viewer to the objects being viewed. The lines of sight are always perpendicular to the picture plane.

Eye Level
The distance from the ground plane to the viewer’s eyes. 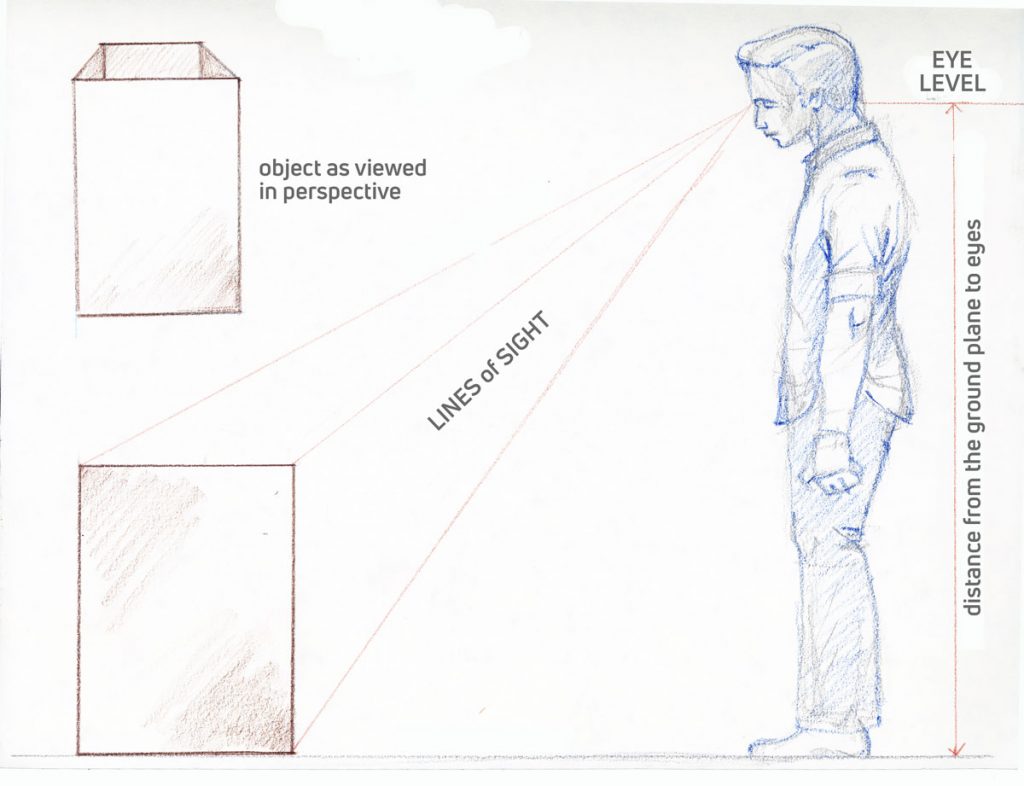 Station Point
Where the viewer stands in relationship to the scene depicted. The farther the object is from the viewer, the narrow the line of sight on the picture plane, and the closer to eye level.

Vanishing Point
The point at which parallel lines converge at eye level.

Illusion of Depth
Our understanding of depth in a two-dimensional image is determined by the relative size or proportion, position and shape of objects in the picture plane.

Diminishment
Objects located farther from the viewer appear smaller than objects that are closer.

Vertical Placement
The vertical position of an object in the picture plane helps communicate its distance from the viewer. 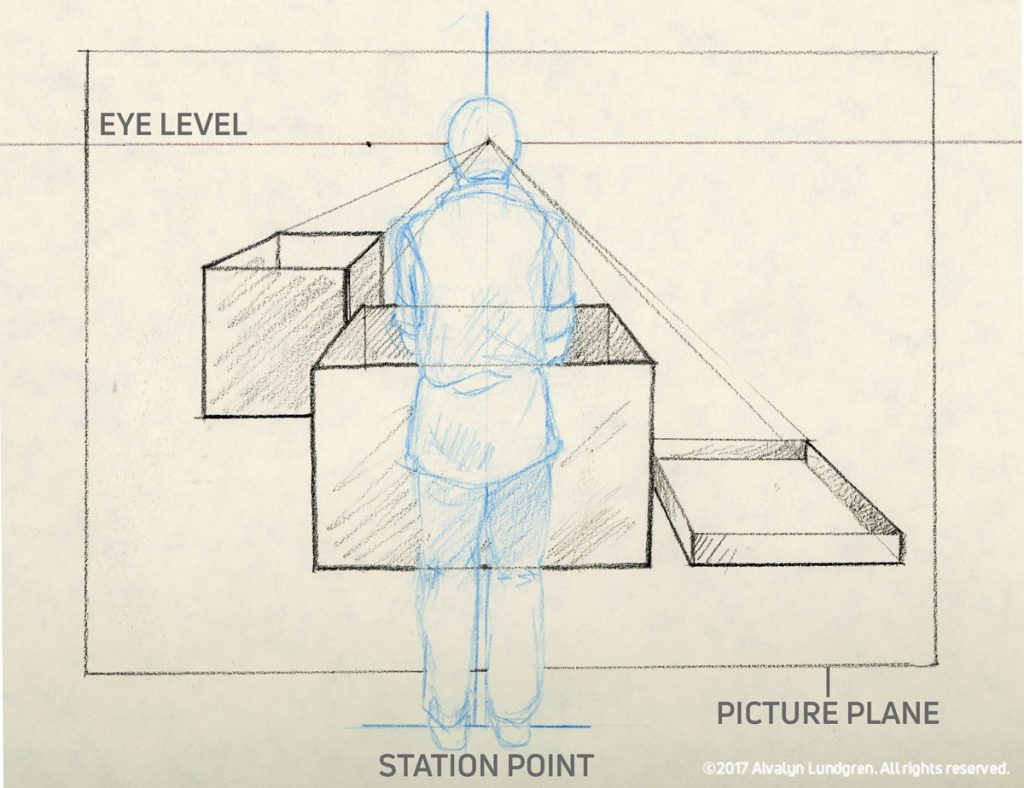 Overlap
An indicator of spatial relationships. One thing is depicted in front of another.

Horizontal/Vertical
These are natural axes we use to understand, move in and relate to space and objects. The human body has built-in horizontal and vertical axes. 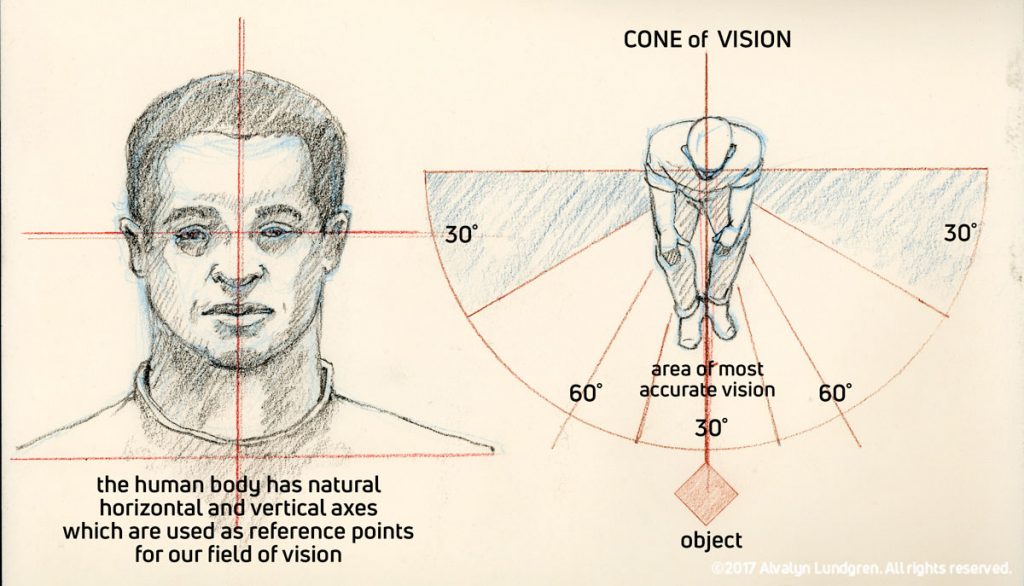 Cone of vision
From the center axis of our head, we see accurately about 30˚ to either side of direct center. Each eye enjoys 60˚ coverage, and overlaps 30˚ in the center of the cone of vision. Objects outside this cone appear distorted.

Including peripheral vision, we can see 150˚ horizontally without turning our head. Vertically, our vision is limited to about 140˚ due to our anatomy.

There are 5 perspective angles. These angles are determined by whether or not the face of a cube is parallel or angled in relationship to the viewer’s picture plane

One-point parallel occurs when you see one side of an object in the vertical plane. Horizontal and vertical angles of the face with be parallel to the edges of the picture plane.

Two-point parallel occurs when you see two sides of an object in the vertical plane and there’s true symmetry in which one side exactly mirrors the other.

Two-point angular occurs when you see two sides of an object in the vertical plane and you see more of one side than another. 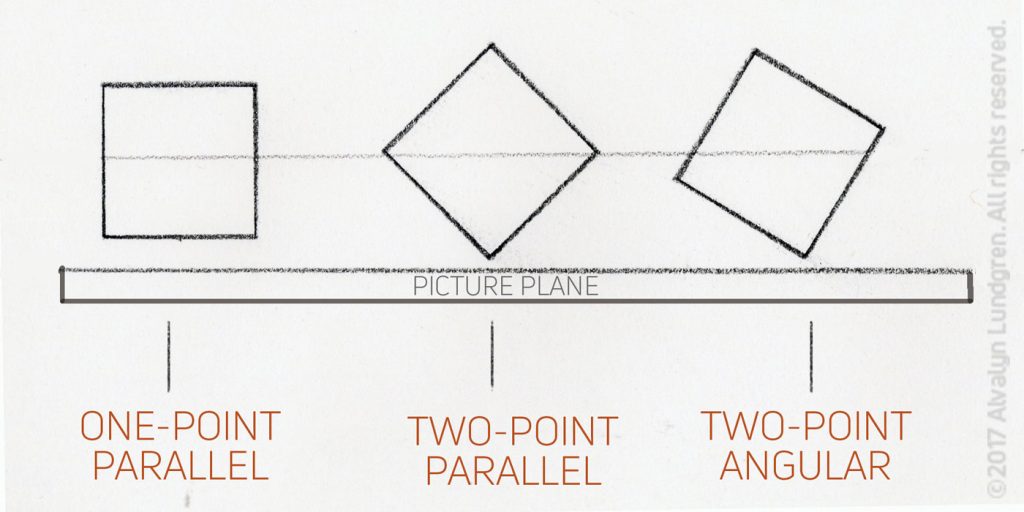 Tips for drawing what you see:

Understand your lines of sight in relationship to objects, corners and edges within your visual field.
Use object points (corners and landmarks on objects) as cues for position and direction in space.
Find proportions by measuring and estimating, making comparisons of angles based on right angles and size in
relationship to other distances.

How To Find Angles and Proportions In Linear Perspective

How To Draw Three-Point Perspective