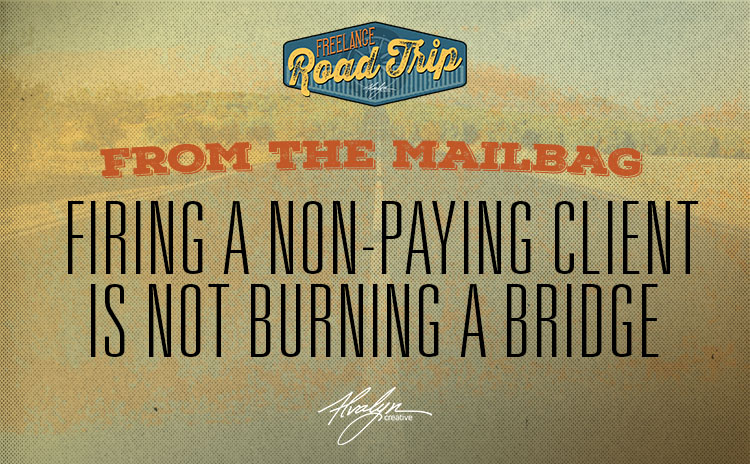 Firing A Non-paying Client Is Not Burning A Bridge

From the Freelance Road Trip mailbag:

Here’s the situation as she explained it:

“I have a client that has ignored my invoice and is not paying. A little background:

“I have worked with this person many times in the past when she was a liaison [for] another client. I was always paid on time and never had a written contract because of mutual acquaintances.

“Now she has a new client needing a logo and stated, ‘You have no reason to fear a payment issue since their combined net worth…is very high. You can bill me through email when this is complete and you will be paid within ten days.’ “

“They refused to fill out the design brief I requested but [in] trying to work with them, I…provided eight different logo comps. [The] first set of four…was rejected, then a second set of four. Long story short, [my client] told me ‘They don’t like logos so they will use just their name. I have to give them a bunch of fonts for them to select [which] they will use.’ “

“Here are the comments I received from the interior designer (who was asked to weigh in by one of the principals): ‘I feel your logo should be classic with a twist. I would keep the background white with the type in a grey with a small hint of color and perhaps a second shade of grey somewhere. I would use a classic type face like Helvetica or Gill Sans.’

“For more information … these guys are in their sixties, well established and very successful in their law practice. They are leaving a major firm after a five-year period because the firm did not provide them with the associate support they need. One loves modern and the other traditional.

“They actually thought they did not need a logo but did not understand that they need something for business cards and letterhead, etc.”

“Long story short, [my client] told me “They don’t like logos so they will use just their name. I have to give them a bunch of fonts for them to select the font they will use.”

“Yes, it was very frustrating working without a design brief! I did let them know a few times…why I needed it to no avail. Getting feedback was like pulling teeth. I was told they were busy lawyers and didn’t have time for such things.

“I then sent [my client] an invoice for the work I did for the agreed amount and gave her client till the end of the year to decide on one of the logos if they change their minds.

“There was no real contract or down payment and I was dealing only with my client. There was only an OK for me to go ahead and create the logo for the agreed upon price. My client gave an address of where her clients will be conducting business after all the renovations have been made for [their] new office. I [used] this address on the invoice.

“It’s been a month since I emailed the invoice. My question is: Do I send her a past due notice or swallow that learning pill? I hate to burn a bridge.

Yes, I definitely see why I needed to take the extra time and write out the contract

The key concerns in this scenario:

There was no written contract. A contract protects both the designer and the client, and is the basis for a successful working relationship. It’s a document agreed on by both parties that outlines the expectations.

There was no down payment from the client or the client’s client. A down payment is a material investment in the design process, and a sign of respect between the client and the designer. Unless they’re working on a contingency or pro bono basis, attorneys will both require a contract and down-payment (retainer) from their clients).

The client’s client — what I’ll call the third party client — was a law firm (!!!) and the designer was not given direct access to them. Working with a client through an intermediary is not uncommon in our industry. It’s not the best way of working because things can get lost in translation, but it’s done quite often.

While past history can predict the success of a working relationship, it’s not foolproof.

The designer accepted the project and proceeded with the work based on a prior relationship with her client and recommendations. While past history can predict the success of a working relationship, it’s not foolproof. It’s time to change the no-contract habit.

The third party law firm client was unresponsive and unwilling to provide the designer with essential information about their purpose, vision and mission, and considered her design brief questions irrelevant to the development of their visual identity. Why would a client refuse to provide a design brief if they’re expecting effective design?

In my experience, if a client is not going to respond to a set of inquiry questions from the design, they’re very likely not going to pay the designer for what they order. That, and they’re not taking design seriously.

In order to design effectively, the designer needs basic information about the project. Without it, she will not be able to hit the target. When clients withhold what’s necessary the designer is hobbled in her ability to create appropriate designs.

When clients withhold what’s necessary the designer is hobbled in her ability to create appropriate designs.

Lack of a design brief also makes it impossible for the client to know what will work for them. They have no basis other than their own personal taste and style, which is not what you base your design solutions on if the client wants to connect with their clients.

The third party law firm client was uninformed about the importance of visual branding to grow their practice and regarded a logo as a decorative thing.

The third party law firm client asked their interior designer to advise on the development of a graphic design asset. It’s not conclusive that the interior designer was qualified to comment on the effectiveness of the design or on visual branding in general.

My recommendation to the designer was to consider walking away. She was not being respected as a professional peer. And since the client(s) had not paid for the work, the bridge between them and the design was already destroyed.

I advised that she send a final invoice with a 10-day term.

If she received no response, she should follow up immediately with a release of client letter stating that the designs she created were preliminary and that she retained ownership. Also, since the client had not paid for any of the work, no copyright would transfer to either her client or to the third-party client.

I also recommended that the designer register her copyright to her designs in case she needed to enforce her rights legally down the road. Registration is for the purposes of enforcement. Creators automatically own the copyright to what they create without needing to register.

My final word of advice to the designer was to not be concerned about retaining this client. If she wanted to continue to work with her, that’s her choice, but there was no obligation to continue. She should turn her attention toward looking for well-funded, communicative clients.

Begin every project with a written contract and deposit payment. Don’t start any work without both a signature and money in hand. Then work to the point that the payment is covered, then invoice again for the next phase. That way you’re never working for nothing.

Work client-direct. Avoid situations where you’re communicating through a middleman. You won’t get the direct feedback you need, nor will you be able to ask questions effectively.

Another reason to not work thorough a liaison or broker is because the intellectually property rights will transfer to the client, not the broker.

How it turned out

The designer sent her client a final invoice with a 10-day demand and was told immediately that the law firm client had not paid her, and that because they didn’t pay her, she doubted they would pay the designer’s invoice.

About two weeks later the designer received payment from her client of 40% of the total amount owed. She asked about the remaining amount but received no reply. She then sent a release of client via email, to which there was also also no reply.

Related articles on this site:

Contracts Protect the Design and the Client

Six Freelance Contract Mistakes and How To Fix Them

Have you signed up for Freelance Road Trip updates yet? Get tips and guidance for your freelance journey twice each month. Click here to subscribe. It’s free, and you can unsubscribe any time.