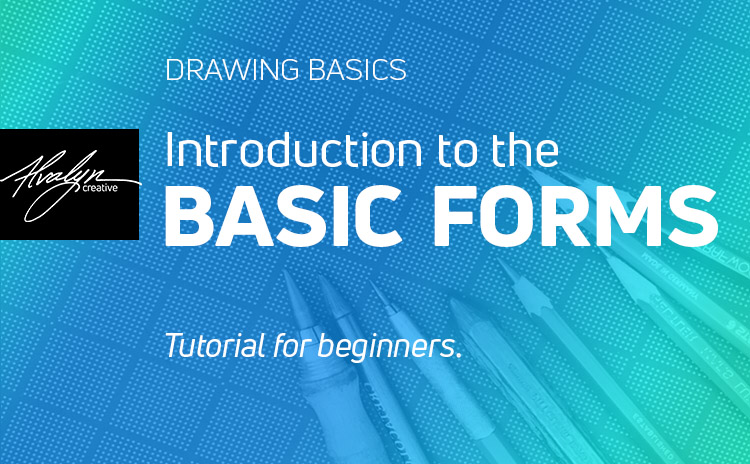 As with any discipline there are fundamentals that are often overlooked but which are absolutely necessary to draw and paint with accuracy.
If you’re a beginner, learning to draw from large form to small detail is crucial to develop good habits and approach. If you’re a seasoned artist or designer, basic forms exercises are an excellent warm-up for drawing and painting sessions.
Along with gesture, contour, and light/shadow relationships, basic forms are building blocks for image-making.
Share on facebook
Share on reddit
Share on twitter
Share on linkedin

From the 3 basic shapes: circle, triangle and square, we develop sphere, pyramid and cube.

I think it’s good to note that the basic forms, otherwise  known as primary solids, can be described via geometry. Drawing and design have a lot in common with mathematics.

This drawing illustrates the three basic shapes, their related forms, and hybrids (cylinder and cone).

Enjoy Free Shipping On Orders of $45 or More from DickBlick, and a Free $10 E-Coupon On Orders of $75 or More! Promo Code CFBC. Exclusions apply.

Characteristics of the basic forms

Sphere [circle]
This form has no edges or corners. It’s dynamic, meaning it in itself has a sense of motion.
Even so, a circle can be created by drawing a series of intersecting lines going different directions. And a sphere is defined by the intersections of countless conceptual planes.
Circles and spheres are considered complete and perfect.
While we can draw a cube and a pyramid as volumes using only lines, we need shading to show the volume of a sphere.
Cube [square]
A cube is made of 6 intersecting planes. This results in 8 corners and 12 edges. All the planes meet at right angles, making corresponding sides parallel. If all angles aren’t right (90˚) angles, the form is not a cube.
Unlike the sphere — and because of the edges and corners — we can draw a cube using lines alone, with no shading, and it is perceived as a volume.
When all 6 sides are equal in length and width, we have a square cube. If the cube is compressed, making some lengths shorter, it will appear rectangular.
The cube is also considered complete and perfect. But unlike the sphere, it is grounded and static.
Pyramid [triangle]
Pyramids have a base and non-parallel sides that converge to form a point.
The base of a pyramid is a square, and the form has four sides with triangular faces.
Pyramids are stable but also dynamic. The wide base and narrow apex create stability, but the diagonals create the perception of movement.
When inverted and  placed on its apex, the form becomes physically unbalanced and unstable.
Processing ...

This website stores cookies on your computer. These cookies are used to collect information about how you interact with our website and allow us to remember you. We use this information in order to improve and customize your browsing experience and for analytics and metrics about our visitors both on this website and other media. If you decline, your information won’t be tracked when you visit this website. A single cookie will be used in your browser to remember your preference not to be tracked.AcceptDeclinePrivacy policy