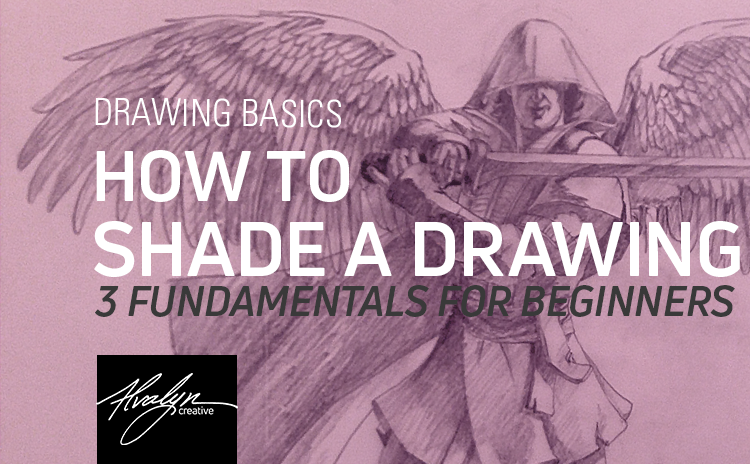 Shading is the process of adding tonal areas to your drawings and paintings to make them look more life-like. How to shade a drawing is one of the most-asked questions people have when first learning to draw. We know what we want our drawing to look like, but can’t quite make it happen.

This article should help you out, and if you read all the way to the end you’ll find a couple of easy exercises you can do to apply the principles I lay out.

First, let me say that you need to draw realistically before you can draw expressively or be concerned about style. Drawing realistically requires accuracy. It’s a matter of careful observation and correct interpretation of form.

This includes understanding structure, shape, planes, lighting, perspective and proportion. Analyze everything from this point of view. Once you get hold of this approach, you can draw anything, no matter how complex.

You need patience and realistic expectations. I’ve worked with people who want to draw well, but want to draw well from the get go. They give up when they find they can’t draw as well as I can.

Like most disciplines, drawing ability is acquired with experience. You need to develop skill. Like a pianist who begins learning scales and learns to sight-read one clef at a time, artists and designers learn to draw by adding to existing skills.

One of the first things you need to know is how to hold a pencil.

The importance of form

As a noun, form is the visual appearance of something. As a verb, form is how something is made. Put the two together and you understand that the visual appearance of something is the result of how it’s made. So your approach in drawing needs to be to understand how something was formed. If you don’t think that way, you’ll focus on drawing outside edges. Case in point, here’s an example of a glass drawn without regard to how it’s formed, next to a drawing the carefully considers the structure and relationships of parts to the whole.

The purpose of shading

Shading creates a sense of reality. It makes your drawings life-like. That’s its purpose. You use shading techniques to “flesh out” the forms your’re communicating. It adds volume — three-dimensionality — and helps make your drawings believable.
Three foundational things you need to understand about shading are:
1] We don’t see without light, and where there’s light, there’s also shadow. So light and shadow combine to “reveal” form. The stronger the light, the stronger the shadows. On a cloudy day, shadows are less defined and forms are less distinct because the light is diffused.
2] Light and shadow reveal form. Form is made of planes. A plane is a 2-dimensional area. A 3-dimensional form is the sum total of all its planes. A cube — the most basic volume — is composed of 6 planes — 4 side planes, one top plane and one bottom plane — intersecting at right angles.
3] Shading’s first concern is depicting light and shadow relationships. Light and shadow work together in a logical, consistent way. My lesson on light logic is here.
Your first priority in shading your drawings is to separate light and shadow areas, not to show color changes. If you focus on color changes, you’ll lose the form and your drawings will appear flat.
It’s not enough to just your technique right. The mark of a good designer or artist is that they understand why things appear the way they do, and that to draw expressively, you need to be able to draw accurately if you want to create anything that communicates well.
When learning to shade, focus on depicting volume, not on your technique. Look for which planes are getting hit by light and which are turned away from the light. Those are your light and shadow breaks. Refer to my lesson on light logic here.

When shading, look at the larger light and shadow shapes first, and draw those in. Then address the smaller shapes and details with the larger areas.

By starting with the overall idea, you’re halfway home in depicting volume.

To draw well, you must develop good analytical skills. When observing a form, you need to ask what are the overall shapes, where do the planes intersect?, What are the shape relationships and proportions? How long is this edge compared to that edge? What angle is the edge? How does this angle relate to that angle? Start with the big idea and then move to the smaller details, not the other way around. So you see that drawing involves creativity but also logic and reason. If you’re serious about learning to draw, get real about your expectations, allow yourself to make mistakes, and stop using your eraser so much. Focus on understanding how things are formed. Above all, make a commitment to drawing regularly, if not daily. You won’t improve if you don’t go after it.

Place a ball or egg on a flat surface and use a single light source — like a desk lamp.

TIP: an LED or incandescent light bulb will create more defined shadows than a CFL bulb.

Take a few minutes to analyze and process what you see. Study what’s happening with light and shadows. What do you see? What shapes do you observe? Where do those shapes begin and end?

Then start drawing what you see. Look for the light and shadow shapes on the form. Then look for the shadows cast by the form onto the surface.

For this exercise, find a photo of a face, or take a photo of a friend or family member in direct sunlight. The photo should have distinct light and shadow shapes. You can print the photo or look at it on your phone or device.

First, observe and pay attention to how light and shadow shapes relate to each other. Study what you see before you begin drawing.

Where do edges look sharper and where do they appear softer?

What’s the overall shape of the shadow?

What smaller shapes appear lighter or darker inside the larger shadow?

Step back from your drawing. What do you see?

If you paid close attention and focused on light and shadow shape relationships, you should have a high-contrast drawing that quickly communicates the basic form.

Continue these light and shadow studies with different objects and photo reference. Repetition will develop your observational skills.