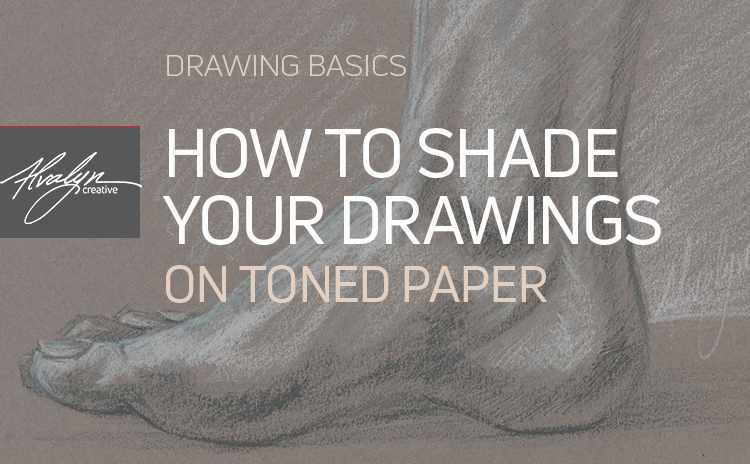 Shading involves two concerns: actual technique and values. Contour line is where most people begin a drawing. Since line is all about the edges, they can lack the appearance of dimensionality. When you shade your drawings, you create a more obvious illusion of volume.

The purpose of shading is to “sculpt” forms from out of the paper or canvas to create volumetric illusion. In order to shade effectively, we first need to understand what form is and how we see it.

Form is defined as the visual appearance of something. It’s a three-dimensional concept. Forms are three-dimensional objects (also architecture, animals and people) made up of shapes. When we view a form, we can’t see the entire thing at once. To see it all, we need to rotate it, or — if it’s a large form such as a human being or a car — walk around it.

There are various types of forms:

No matter what the variety of form, light and shadow work together to reveal it to us.

Shading depicts the relationships between light and shadow. When light hits a form, certain things happen that you can rely on. Once you understand the regular patterning of these relationships, you can shade anything convincingly. 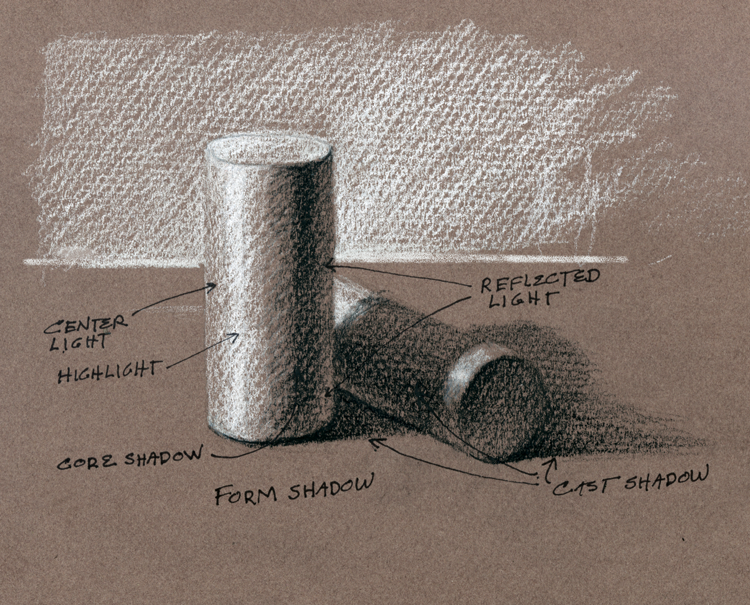 There is the direct or center light area where the light hits the surface straight on.

Within the center light area sits the highlight — the area where the light is most luminous. Shiny objects have a very pronounced highlight. Softer-textured objects have subtle highlights. The highlight follows you around the form.

Where the form begins to turn away from the light is where the halftone exists. This is the transitional area that’s only half-lit; it’s the start of the form shadow’s territory.

Getting the core shadow right is a key concern when you’re depicting volume.
Without it, forms will appear flat.

Moving farther into the form shadow we encounter the core shadow — the darkest part of the shadow. Getting the core shadow right is a key concern when you’re depicting volume. Without it, forms will appear flat.

On the other side of the core shadow is the reflected light caused by light bouncing into the shadow from nearby surfaces.

Cast shadows occur when forms block the path of light. We use them to help communicate the shape of the form and its relationship to the surrounding space.

Cast shadows are not a single, solid color. Within the cast shadow we find lighter and darker areas. The darkest area is call the occlusion shadow. Cast shadows have sharper edges close to the form, and softer edges farther away from the form where there is more light bounce.

When you simplify an organic form, or abstract it, you’re reducing the number of planes the form is made of. Planes are flat, two-dimensional areas. The more planes in a form and the smaller they are, the more “round” the form appears.

Then, figure out basic light and shadow relationships. Where is the break between the center light and the from shadow? What’s the overall shape of the shadow and the lit area?

The development sequence above begins with a gestural line sketch (left panel) to decide shape, proportion and movement.
The light source is coming from our top left.

Shadow and light areas are built up (center-right panel)

Once you determine the basic light and shadow shapes, you can build detail, breaking up that initial simplified shape into its smaller parts and assigning light and shadow relationships within each.

Focus on light and shadow, not local color

Edges on forms can be soft or hard, or somewhere in between. As you gain skill and confidence you can use these edge contrasts to your advantage in depicting form.

When you draw from photos or from life, multiple light sources may be present. Your task is to edit, and ignore all but the most relevant light source for depicting the form.

In photos, multiple cast shadows going in multiple directions are not a problem, but they don’t translate well to depicting form in drawing and painting. So, don’t include what you don’t need.

By eliminating excess light sources, you’ll simplify your drawings and make them stronger in how they communicate.

Strong light results in strong shadows. On an overcast day, light is diffused and shadow are soft. Forms appear flat. If you’re shooting a portrait, the diffused light is helpful for reducing the appearance of wrinkles.

However, in a drawing, lack of light–shadow contrast will flatten your form. A strong direct light source is necessary to create a convincing volumetric illusion — the appearance of three-dimensional form on a two-dimensional surface.

Even if you don’t actually see these strong contrasts, you can include them to create a more compelling image.

Tools and materials used in the illustrations

What questions do you have about shading your drawings?