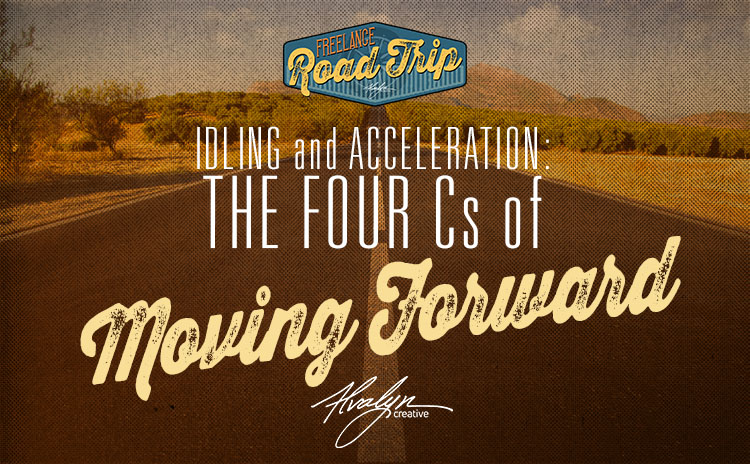 Idling and Acceleration: The Four Cs of Moving Forward

I’ll get to it when I’m ready.

I’m sure you’ve had the experience of planning to get something done and then putting it off until it became absolutely necessary to do it. Or you didn’t get around to it at all. I’ve operated that way a lot in my career. I have students who operate that way and who claim it’s their preferred way to operate because somehow they’re more creative under pressure. Maybe so.

I’ve learned that procrastination can be a mistake, especially when you don’t know what’s coming. Taking control now prepares you for what you encounter on the road ahead.

We can’t run our businesses solely on spur-of-the-moment actions and last-ditch efforts. Although we tend to put off doing things until we feel we’re ready, what we don’t “get” is that it’s in taking action and moving forward that we become ready. We make ourselves ready by taking action.

Back when I coached girls softball, I wanted to instill in each player the confidence to take charge of the ball whether they were hitting, catching or throwing. I talked about gripping the ball. I demonstrated how to hit, how to throw and how to field. I showed them how to reach out for the ball with their glove and grab it out of the air. But it was not until each player began to hit, catch and throw that they faced their fear of the ball, built skill and realized they could affect the outcome of a game. With each small success, they gained confidence.

Our default is to wait until we have the confidence to do somethings, not realizing that it’s in the doing that confidence is built. So if we wait until we’re ready, we never will be.

In Freelance Road Trip terms, we can spend time idling our engines, anticipating the exact optimum moment to move forward. We wait for the light to turn green. Then we accelerate quickly to full speed. Then we come to the next crossroads and slow down, come to a stop, and idle once again.

Idling is when the engine is running but we’re not moving. It a state of potential motion, but we go nowhere. I know I’ve spent way too much time idling, anticipating doing something, and not getting around to it.

I prefer the open road. A vehicle that moves at a steady pace is more efficient than one that idles and accelerates over and over again. To realize success as independent creatives, we need to move forward consistently, even if we do it slowly, and even when we think we’re not yet ready. Once we make the commitment to move, that’s when we begin building competence, and competence (capability).

This cycle describes a wheel. Wheels are all about moving forward. 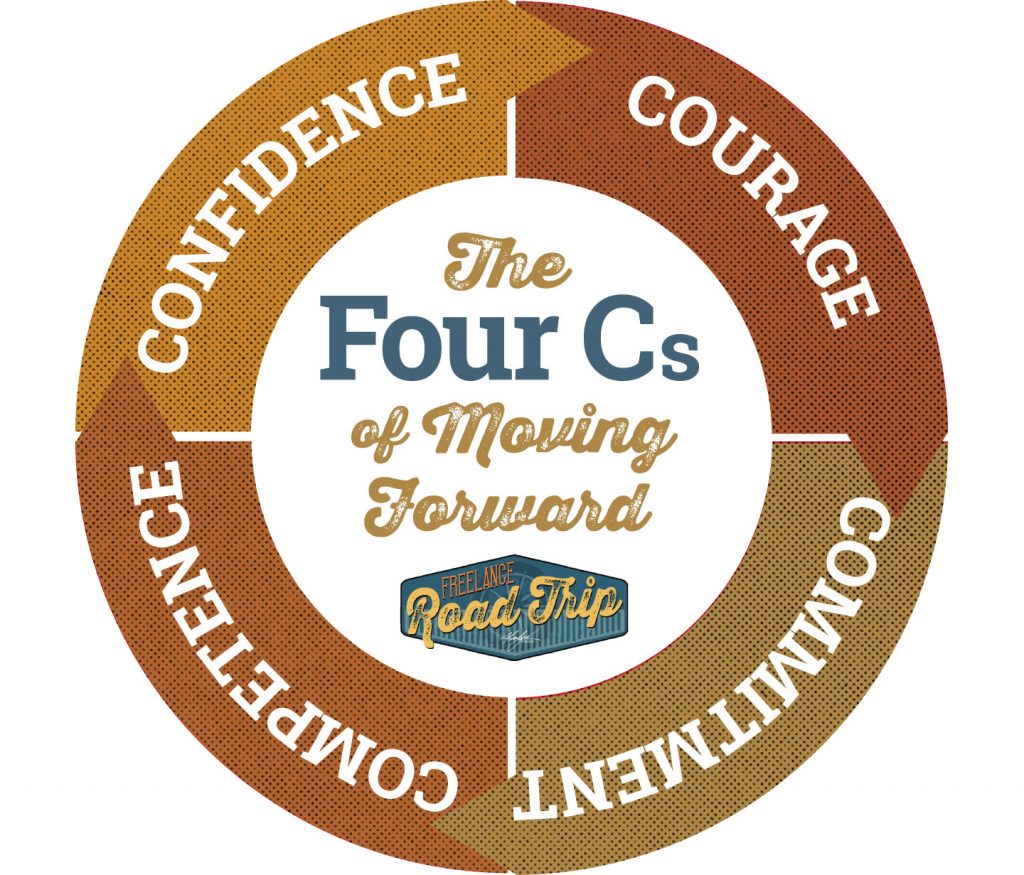 Often we delay moving forward out of fear. Or we’re uncertain of the outcome. Deciding to move forward without knowing if you will be successful takes courage. There is no “safe place” for the courageous. They step out into the unknown and take on the challenge. If they fail, they shake it off and step out again.

When you procrastinate, you’re not taking charge of your success. You’re allowing distractions and current circumstances to determine your actions and keep you from the activities necessary to build and sustain your business. You also put yourself in danger of not having enough time and resources later on. Really, what are you waiting for? Is your reason for waiting realistic?

Once you decide to move forward, take a step, take the next step and commit to keep going. Careers are build one step at a time.

One way I’ve learned to commit is to know my motives are. Why is the goal or action necessary? What will I get out of it? Setting a goal for no reason will usually result in not achieving the goal.

As you write out a goal or action plan, ask yourself what’s at stake for you, your business and your household if you don’t do it? If there’s no pain for you in not doing something, you’re not going to do it.

Once you identify what’s at stake, write it down and include it in your goal or action plan. For example:

In the next week, I will identify and contact 7 new prospective clients because I need to be able to pay my mortgage next month.

Keep the because in mind. Understand that inaction has a much consequence as action is motivation enough for most people to get moving.

Once you do something, it’s easier to do it again, especially if you’re successful. Obviously, the more you do someone, the better you get at it.

If I reach out to one new prospect and now have them as a regular contact, that’s a win, and I am more capable of reaching out the next time. I become better at it and am increasingly successful at building connections more often.

As you act on things, you get used to the progress you make, and you’re less likely to put things off so often.

The more often you do something, you become better at it. Greater skill leads to more confidence. Confidence is a direct outgrowth of capability. So in the case of this goal, you step out confidently in contacting prospective clients, and make connections more often.

You’re probably more ready than you think you are.

The Four Cs cycle applies to anything you do creatively, in business, and around the house. When you get through one full cycle you’ve acquired courage to go on to the next thing, and the next. While we don’t rest on past successes, they are the things that encourage us to keep moving forward.

Have you ever been behind a vehicle that didn’t move when the signal light turned green? The driver is distracted and takes some time before pressing the accelerator. Oh the frustration! Do you do that with your freelance business? I have. The things I know I should do I don’t do, or I put them off.  It’s always run me into trouble down the road. I don’t want that for you.

Stop idling. Make the commitment. Move before you think you’re ready. You’re probably more ready than you think you are.

What have you been idling about? What do you need to to in order to move forward but have been putting of or sidelining? What’s at stake if you don’t get it done? What will you do about it in the next week?