Light logic is a system of using value pattern to create the illusion of real space and form. It is simply the idea that light interacts with form in a logical and expected manner. It always does the same thing. You can rely on it.

Light reveals form. We can’t see form without light. In fact, we can’t see anything unless there is light. To draw anything realistically and in a convincing manner requires an understanding of light and shadow and how they work together to reveal the forms we see.

Light and shadow work independently of color. Color, of course, will appear differently in shadow than in light, but a form that has multiple colors is still subject to the laws of light and shadow. So light and shadow are primary over the colors of an object.

One of the easiest ways to begin to understand light logic is with a spherical form. Take an round form with a smooth surface and place it on a table. Aim a strong light source such as a desk lamp or a flashlight on it, and you’ll create light and shadow relationships.

One of the first things to understand about light logic is that the amount of light affects how we perceive form. Under a strong direct light source we will see strong shadows and a lot of reflected light. Under an ambient or diffused lighting shadows will be soft and subtle.

When you want to draw accurately and realistically, you use some sort of tonal shading to depict light and shadow. So it’s important to understand what the shadows are doing. Shadows are formed where there is less light hitting a surface. So by manipulating shadow areas, we turn the form. This creates the illusion of volume. This is light logic.

No matter what medium you’re using, light logic principles are the same.

In sunlight, shadows have a predictable pattern. All the shadows maintain parallel relationship based on the direction of the sun.

Under artificial light, shadows are angled away from the light in a radial pattern with the source of the light at the center of the radius. Additionally, in artificial lighting conditions there may be several different light sources causing multiple shadows in multiple directions. It’s a lot easier when drawing to place your objects or your person under a single direct light source. It just simplifies things as you’re learning.

When light comes from a low angle, shadows are long. An overhead light creates short shadows.

Within the shadows exist the core shadow and areas of reflected light. I’ll demonstrate these below the first I wanted to discuss the difference between form shadow and cast shadow.

Form shadows are created where the form does not face the light the light. When surfaces are not angled toward the light source, they do not appear as light. Surfaces facing away from the light source are dark. Form shadows gradate smoothly from light into dark on rounded surfaces, and help to distinguish various flat planes on a form. 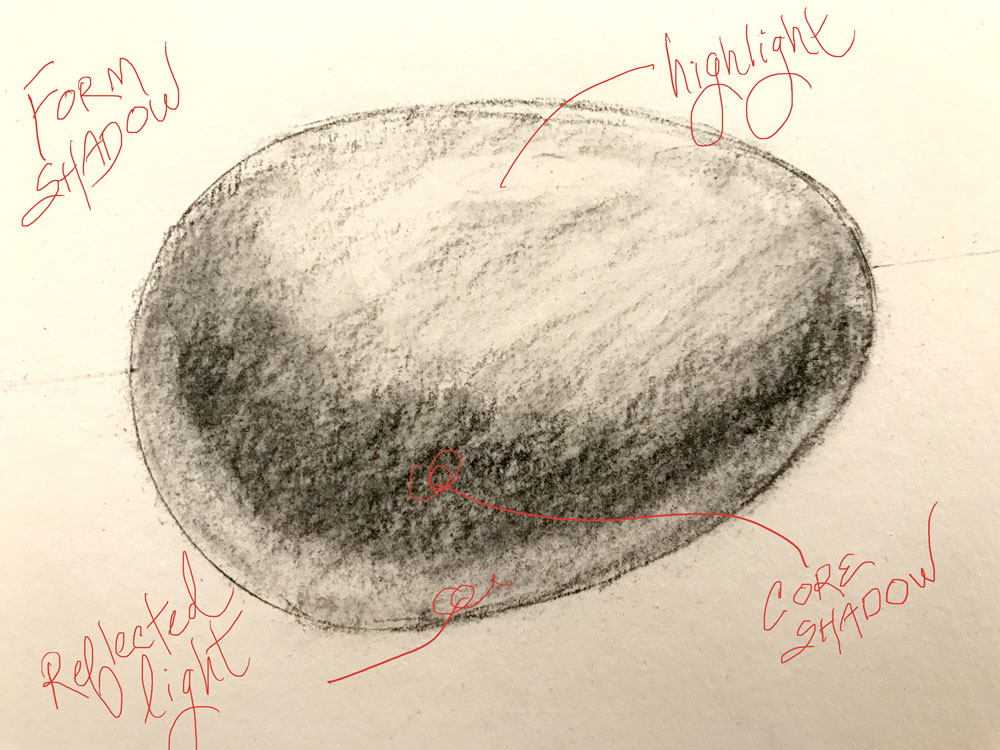 Cast shadows are created when light is blocked by an object. They mimic the form that’s casting them, but are also shaped by the surfaces on which they fall.

Cast shadows have distinct edges close to the form that creates the shadow. As the shadow extends away from the form the edges soften because light is reflected from other surfaces.

Shadows should not be drawn so that they’re all the same color. Because reflected light bounces off nearby surfaces, there are variations in the darkness of shadows. Within the form shadow there is a dark core. This is the area of the form that receives least amount of light. 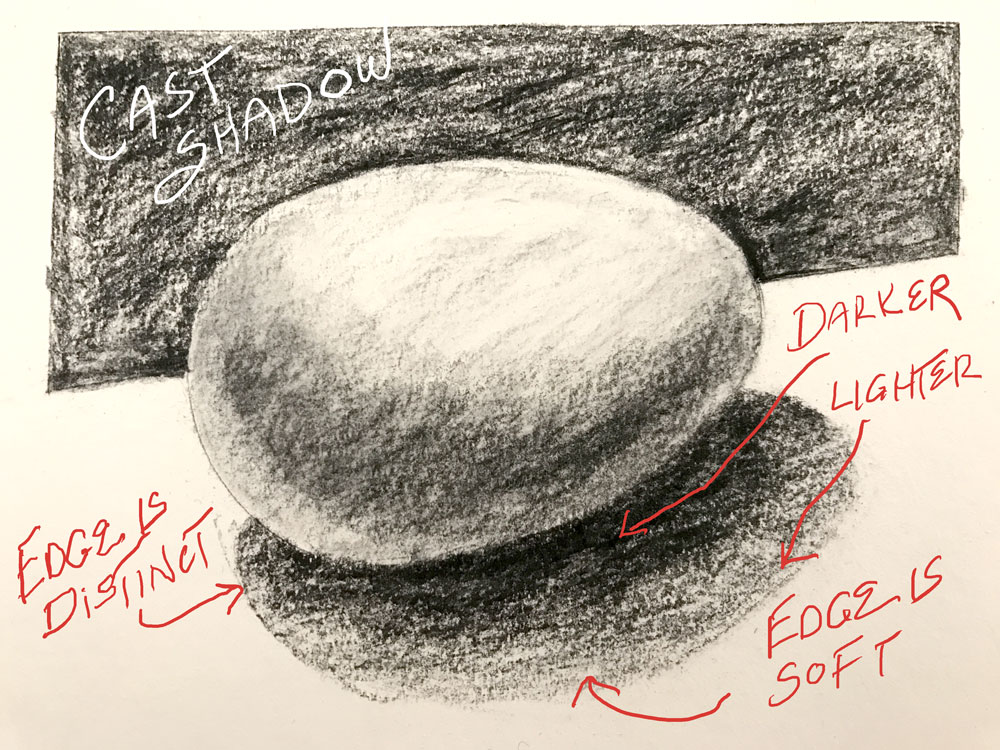 When you’re working with color media such as paint, markers, pastels or colored pencils, you’ll want to keep in mind the idea of opposites or complements when working with shadows. Light that is warm in quality — such as an incandescent lightbulb or sunlight — will create cool shadows. In cool light — such as compact fluorescents — shadows will be warm. You can see this relationship in action in the late afternoon. At that time of day the sunlight appears fairly warm and the shadows take on a very distinct blue, blue violet or violet character.

The patterns of light logic apply to any object. You can use these sequences on anything that you’re drawing and they will cause that object to appear three-dimensional. Light falls on a human face in the same manner it falls on a vase, a chair or a car. When you’re drawing a human face, look for the same light and shadow relationships you notice when drawing a sphere. Look for core shadows and areas of reflected light. These all work together to create the illusion of real space (volume).

For purposes of understanding and for practice, it can be useful to ask what’s going on with the light and shadow in what you’re seeing, and break the relationships into simple shapes. This study is an example from my sketchbook:: 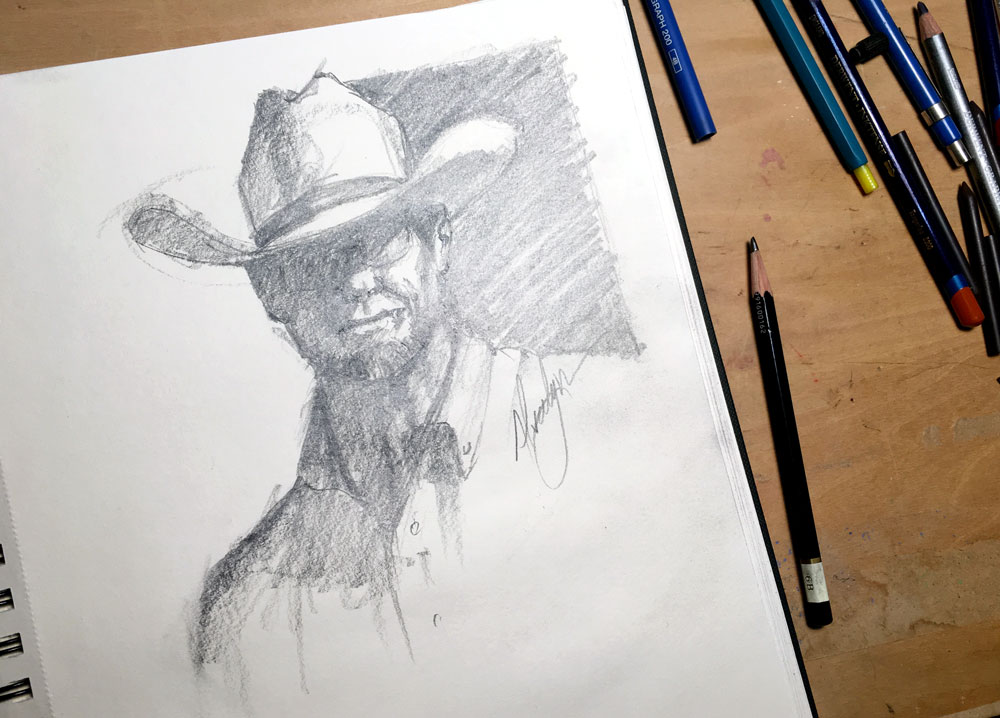 Drawing Tips for Light and Shadow

Build to a full range of value (light and dark).  Find the darkest area in the shadows and establish the blacks.  The color of the paper will be your lightest color if you’re working on standard drawing paper.

Understand that you are sketching form — 3-dimensional volume. Even if you work from a reference photo, work to create the sense of “roundness” in your forms. This is the result of using subtle variations within the shadows and light areas.