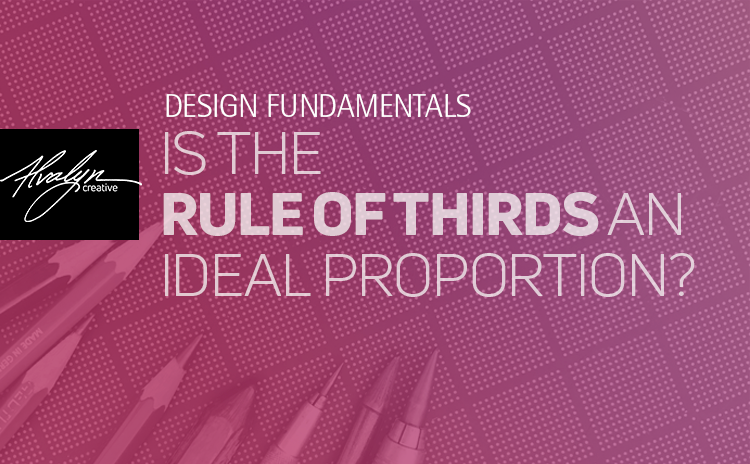 The Rule of Thirds is a popular method for composing designs, illustrations and photographs. You can significantly improve your compositions by following the Rule of Thirds.

And why does it matter whether it is or isn’t?

How you compose your visuals matters big, because you want to communicate clearly. Your best ideas are poorly communicated without well-crafted composition. Proportion is so important to your compositions that it can’t be overlooked.

A composition works when, among other things, proportion works.

Proportion is the size (scale) relationship of the height-to-width dimensions of your design and everything within the design.

We use proportion all the time in design, marketing, art, ergonomics, fashion… all design industries. When we talk about aspect ratio, we’re talking about proportion.

An A4 sheet of paper (ISO standard) has an aspect ratio of 1:√2.  Cut it in half along the long dimension and you end up with two smaller sheets that are the same proportion as the whole sheet.

A US letter-sized sheet is a different aspect ratio than the A4. If you cut it into two half-letter sheets, the smaller sheets have different proportions than the whole.

Television screens used to have a 4:3 ratio. Now, 16:9 is the proportion of high-definition TVs. The size of a TV screen or computer display is measured diagonally from corner to corner. But the aspect ratio or height-to-width proportion remains the same, no matter what the size.

So, let’s get back to the importance of proportion to your art and design…

Why is proportion important?

I can’t stress enough that understanding how forms relate to each other within a design, and how each thing in a design relates to the whole design, is crucial to being able to communicate visually.

You can have a great idea that’s poorly expressed because you haven’t applied proportion and structure in the best way. A poorly-expressed idea has no value in communication.

We human beings tend to prefer certain aspect ratios to others. Some aspect ratios simply make us feel uncomfortable and insecure. We sense that something’s not balanced or complete — it’s to long or too wide. It’s just off.

We gravitate toward those proportions that please us. We observe certain proportions, such as the golden ratio, at work in natural growth patterns, art, design, human proportions, and math. We’re used to them. They make sense. They make us comfortable.

An ideal proportion is an aspect ratio that most people find harmonious and pleasing, no matter what culture or time in history they live.

By the way, proportion is one thing that ties design and art to mathematics, because proportions are expressed geometrically. Geometric compositions are comfortable and logical for us.

Using pleasing visual relationships, and structuring your work mathematically gives it coherence and stability. Without structure and proportion, your design will fall apart.

What is the Rule of Thirds?

The Rule of Thirds is not an ideal proportion like the golden ratio or the square. In fact, it’s not a proportion at all.

Instead, it’s a method of composing your image or layout by dividing the space — no matter what its aspect ratio — into 9 equal sections: 3 rows of 3.

The idea is that, once you subdivide the whole space into thirds horizontally and vertically, you then intentionally compose your design placing the most important elements along those lines, and especially at one of the four central intersection points.

The Rule of Thirds is loosely related to the Rule of Odds which is a Universal Design Principle that states that using an odd number of elements or repetitions is more visually harmonious than using an even number. Three is the first odd or prime number that starts to communicate pattern. Two of anything doesn’t do it. It takes three legs to make a stool stable.

Even Adobe Photoshop® uses the rule of thirds in its cropping tool, if you don’t change its defaults. 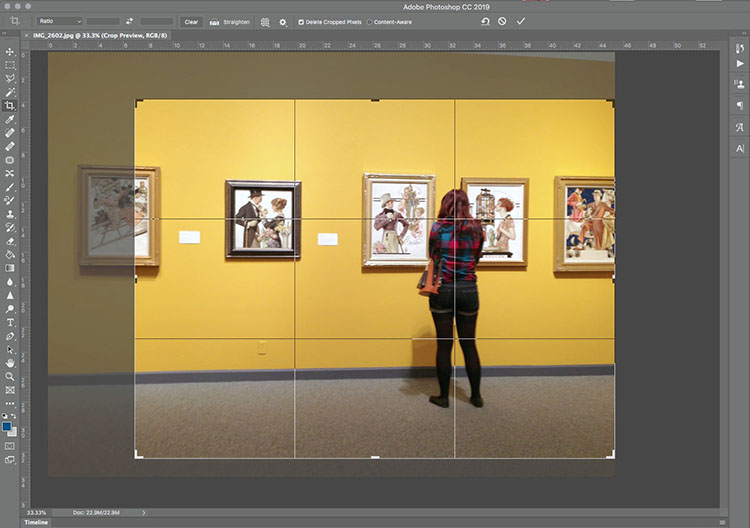 Composing on the Rule of Thirds.

You can also partition several of the sections of the design into zones, and place content within those zones. For example, to create asymmetric balance, you can place less complex or weighty content into one zone and less weighty content in the remaining zones.

For example, you can place the most interesting content in the middle vertical section, and leave the sections above and below more open. This helps lead the viewer’s eye to the most important areas in the design.

You can start your painting with a standard ideal proportion frame, like a 9 x 12 9 (that’s a 4:3 ratio) and divide it into thirds.

Again, the key issue is not how you divide the picture plane (the area inside the frame or edges of your design. It’s how you place the elements within the design to lead the eye to where it needs to go.

Because it’s not in itself an ideal or even less preferred proportion, but a way of creating a structure on which you hang your composition, there’s a lot of flexibility in how you use, and whether or not you use it at all.

Using the rule of thirds is not always necessary. There are other ways of dividing space. What makes use of the rule of thirds useful is that it prevents you from creating a dead-center bullseye in your design. Positioning the focal content smack in the center of the design will make it static and, frankly, BORING!

What makes use of the rule of thirds useful is that it prevents you from creating a dead-center bullseye in your design.

Be considerate of the people who view and use your designs. Make things interesting for them. Engage them visually and then conceptually. Composition makes that possible. A dead-center focal point is easily dismissed, like, “Move along now! There’s nothing to see here.” 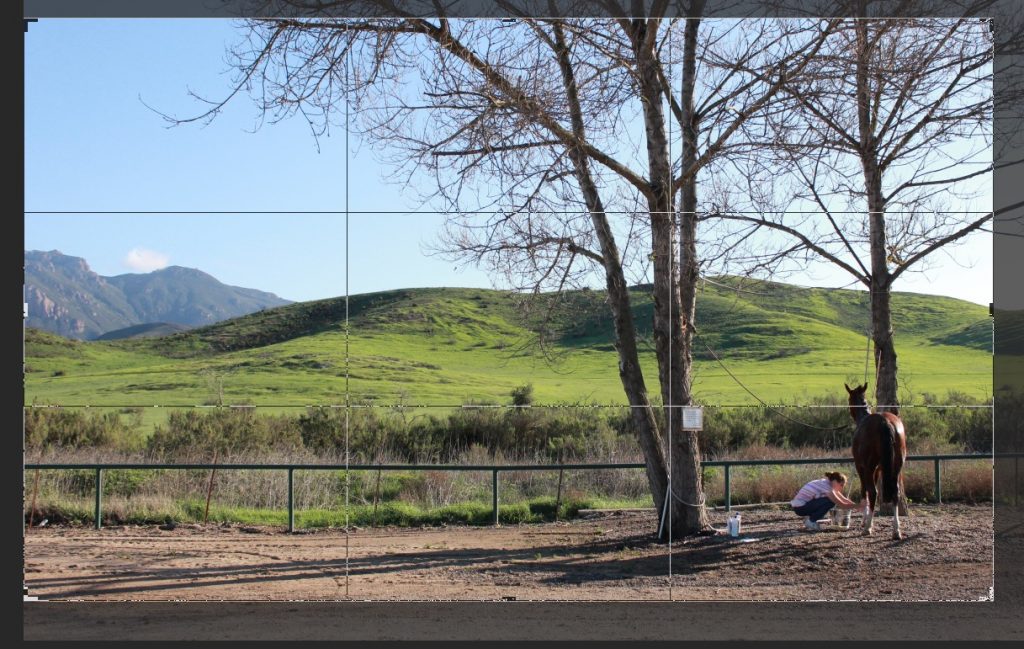 Here is how to use the Rule of Thirds:

1] Draw the overall frame of reference. This is the usually rectangular outline or edge that defines the height and width relationship of your design.

You now have your design space or picture plane divided into 9 equal sections, three across and three down, that are the exact proportion of the whole space, but smaller in scale.

There are four points where the lines intersect.

4] Compose your design or image placing the most important elements at these intersections.

You can balance  the design asymmetrically by placing contrasting or secondary elements at a diagonally-opposite intersection.

Using the Rule of Thirds creates more interest and dynamics than centering the subject. It prevents a static bulls-eye effect because the focal point is not located in the center of the space. 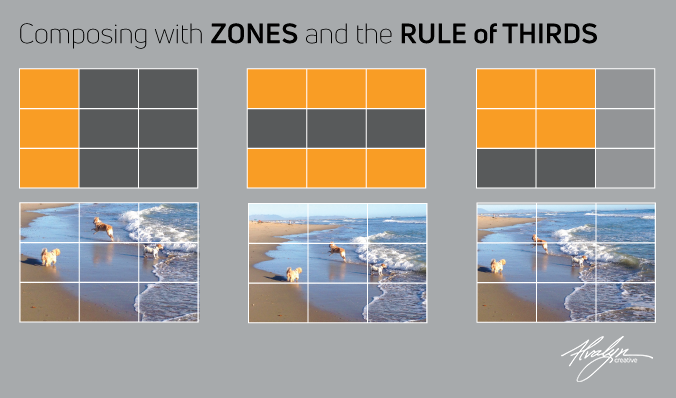 Is the Rule of Thirds better than the Golden Ratio or other ideal proportions?

The Rule of Thirds is an easy and reliable way to create structure in your design. It’s not always the best way.

If you don’t understand how to use proportion, then using the Rule of Thirds is a simple method for composing your designs in an interesting way. However, the rule of thirds is limiting.

For greater flexibility and compelling storytelling, especially when you want a sense of movement, set up and subdivide the space using an ideal proportion. 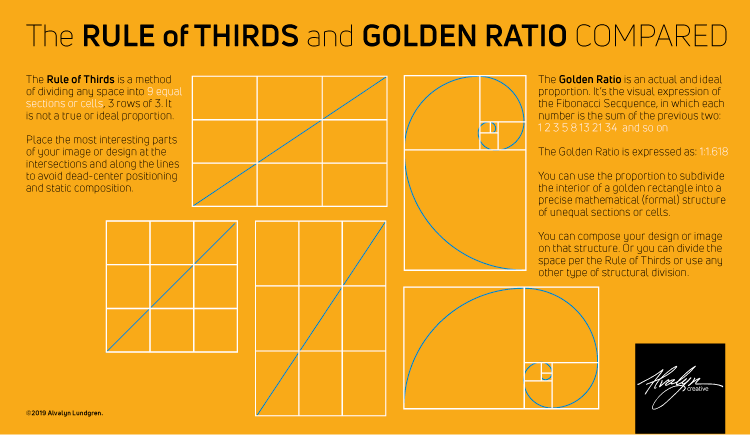 Ideal proportions are best for creating visual pathways and focal points. The whole idea of using proportion and structure in composition is to create work with impact, that’s balanced, and holds together, and that people want to look at.

Go ahead and use the Rule of Thirds, but learn as much as you can about proportion and dynamic composition.

These are a few artists and designers you should study to understand proportion and visual harmony: