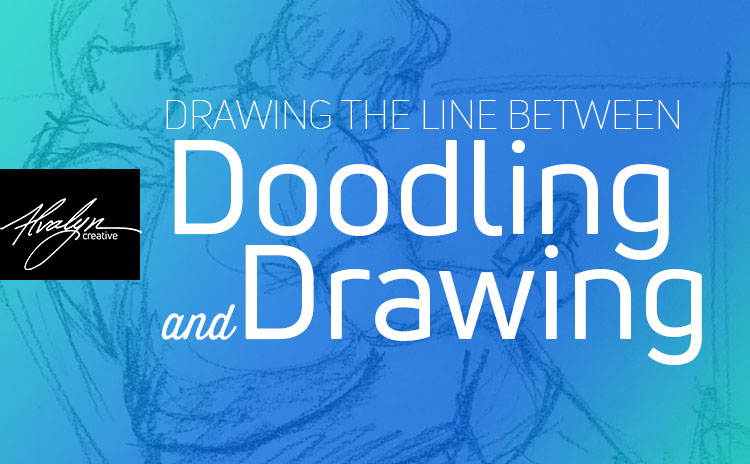 While I think that designers in general should be able to draw well enough to communicate their ideas, (Von Glitska @Vonster tweeted that those who can’t draw end up plagiarizing those who can), they should also doodle. Doodling is what you do when the rest of your senses are otherwise occupied. 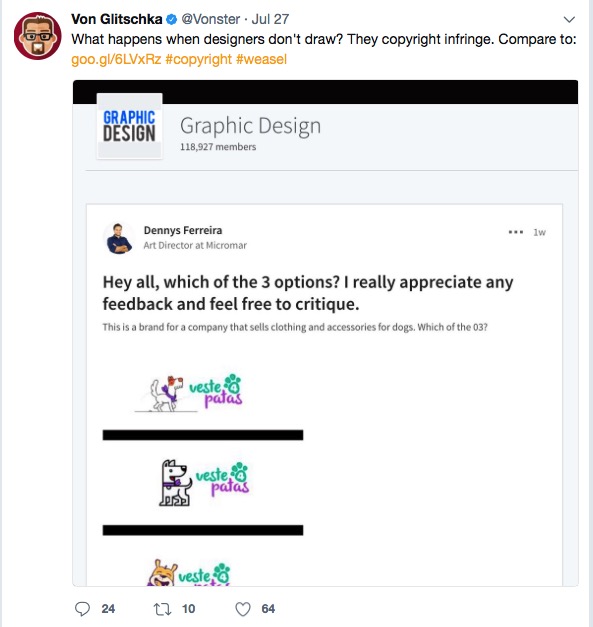 I used to doodle during class lectures, meetings and sermons. I filled the white space in and around my notes with lines and shapes. Then I graduated to drawing in an around my notes. I found that doodling helped me to mentally process what the speaker was imparting.

Drawing does the same thing for me. I’ll select a person nearby and draw them while I listen to the speaker. For example, I drew this profile of Tony Luna during his Art Center class, Crafting A Meaningful Career: 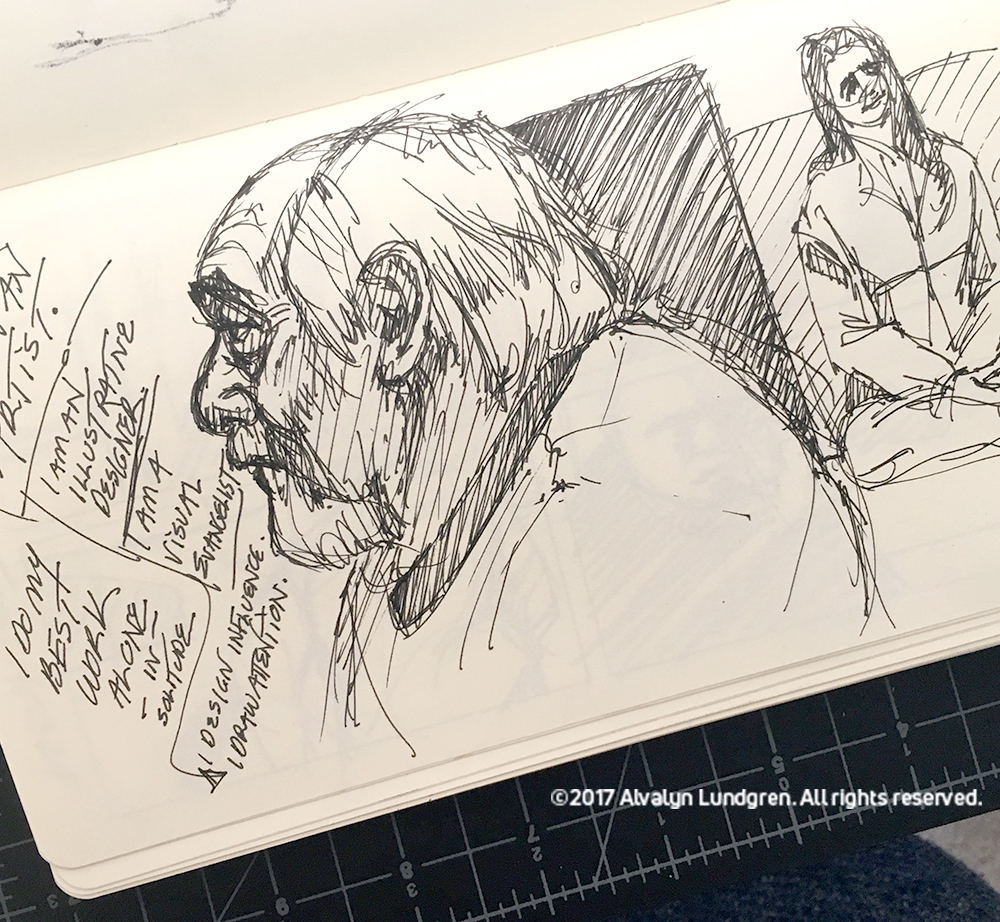 So, what is the difference between doodling and drawing?

Doodling is described as aimless. A doodle has no real purpose but to keep a person occupied. It doesn’t need to depict anything. There’s no pressure to perform and create a meaningful, accurate drawing that communicates well. A doodle is simply a mark or series of marks. They can be playful, geometric, linear, shaded… whatever.

Steven Heller wrote an article about doodling for The Atlantic in which he points out that anyone can doodle. It requires no talent, skill or special training.

Doodling is useful because it helps us process cognitively. It helps us to remember ideas and information.

Doodles are often the result of thinking, but they’re not a depiction of thinking in the way a drawing is. Because doodles are aimless in nature, they don’t need to communicate.

Doodling is to the [artist] what stream-of-consciousness is to the writer.

Doodling is calming. To engage in mark-making quiets us down and we can actually slow down. We can daydream and exercise our imaginations accompanied by the unforced rhythms of what I call visual wandering. Doodling is to the designer and illustrator what stream-of-consciousness is to the writer.

Drawing also quiets us, but we’re not daydreaming. We’re observing, studying, analyzing and moving, our brains and body aligned in a singular purpose. We become quiet because we’re focused on one this and separating ourselves from distractions.

Doodles are not critiqued as drawing is. Neither are they coveted, as drawing is. I’ve never met anyone who was jealous that another person could doodle better than she. In fact, we’re all at about the same level when it comes to doodling.

There are those who equate doodling to mind-mapping, I don’t. I often mind-map in my note-taking. Mind mapping is a blend of notation and drawing. It’s a visual layout of information on a page, a sort of diagram to help explain stuff. Mind-maps are sort of hand-drawn infographics.

Drawing (the activity), per basic Oxford English Dictionary definition, is the making of lines and marks. Well, that sounds like doodling, right?

But a drawing (the thing) is defined as a picture or diagram made with marks and lines.

The verb, drawing, means to produce a picture or diagram. Drawing is a work of visual art — the result of a productive (hence, the work) process — whereas doodling is not.

So while drawing and doodling are both the result of mark-making, drawing takes it up several levels. Drawing is the evidence of focused thinking and attentive observation. Drawing is meaningful. It communicates something, whether form, space, likeness, action, or ideas.

When learning to draw, go for accuracy. Learn to draw form as it is. Draw what you see. (insert challenge here).

Once you have the ability to draw accurately, then you can draw expressively. Milton Glaser discusses this principle here.

Drawing makes us look carefully and understand what we’re seeing. It helps our ability to see better — form, space, gesture, movement — and give us a means of communicating what we see.

Drawing came before writing. It’s the foundation of the written word, whether we write with an alphabet or characters.

This is where doodling can support drawing.

When I teach students to draw, I begin by having them simply make as many marks as they can on a blank sheet. My purpose is to have them get comfortable with making scribbles, hatching, and various types of lines and tones without the restrictions of depicting something. In this exercise I’m asking them to simply doodle.

I’ve watched as many students tighten up and become timid in this simple exercise. “Why do we need to do this? I’m here to draw. Let’s just draw something!” Then they start thinking about the lines they’re making and become even more awkward about it. “I don’t know what to draw!”

This exercise does not ask students to think in order to do. It simply asks them to do, and start getting used to creating lines and tones in general. This is very different from writing. The point of the exercise is to explore mark-making and separate from the control of writing and moving the hand only. In drawing, you need to move from the elbow, shoulder and wrist.

Doodling in this way can be used as a warm-up, loosening the body to engage in the drawing to come. It’s like those stretching exercise ballplayers go through right before a game. It’s a warm-up session that serves the work to come. A ballplayer is not concerned about the mechanics of throwing during a game. The mechanics have become second nature. He or she just aims the ball and throws the runner out at first. 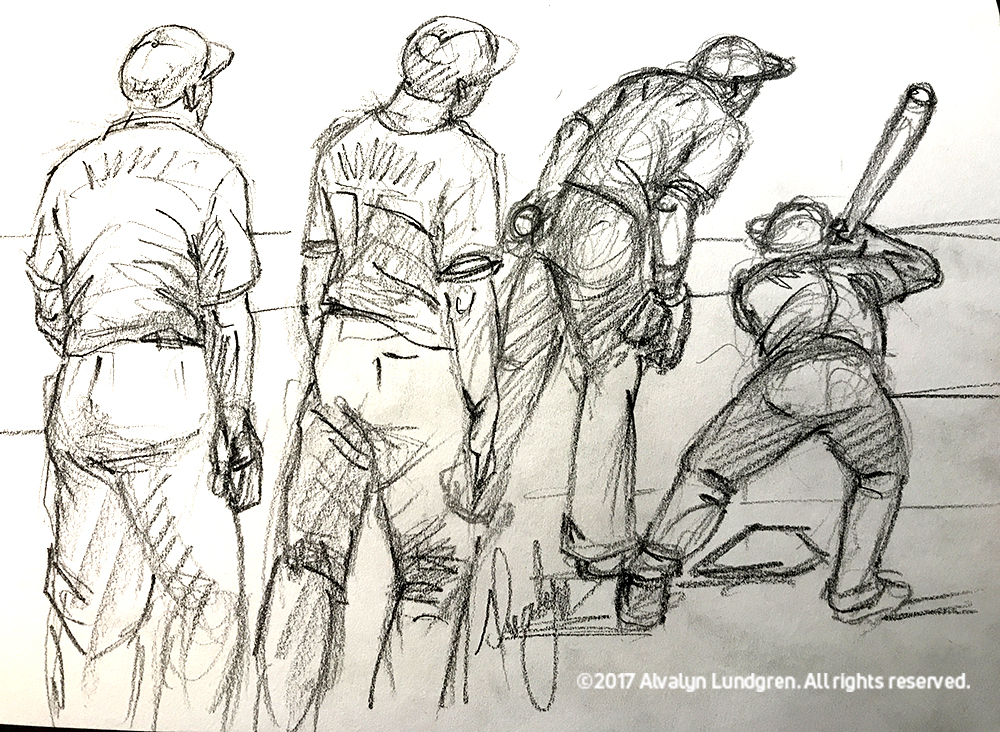 When students get used to making marks without thinking about it, and get used to making a wide variety of marks and scribbles, mark-making becomes automatic and they don’t need to be aware of how they create marks during their drawing session. That means they can focus on what those marks are communicating, which is a higher level of skill and understanding.

My doodling exercises also help with drawing expressively, in which gesture and exaggerated contrasts come into play to create emotion and action. It leads to overstating a straight-curve contrast, for example. And to coloring outside the lines, connecting the figure to the surrounding background. 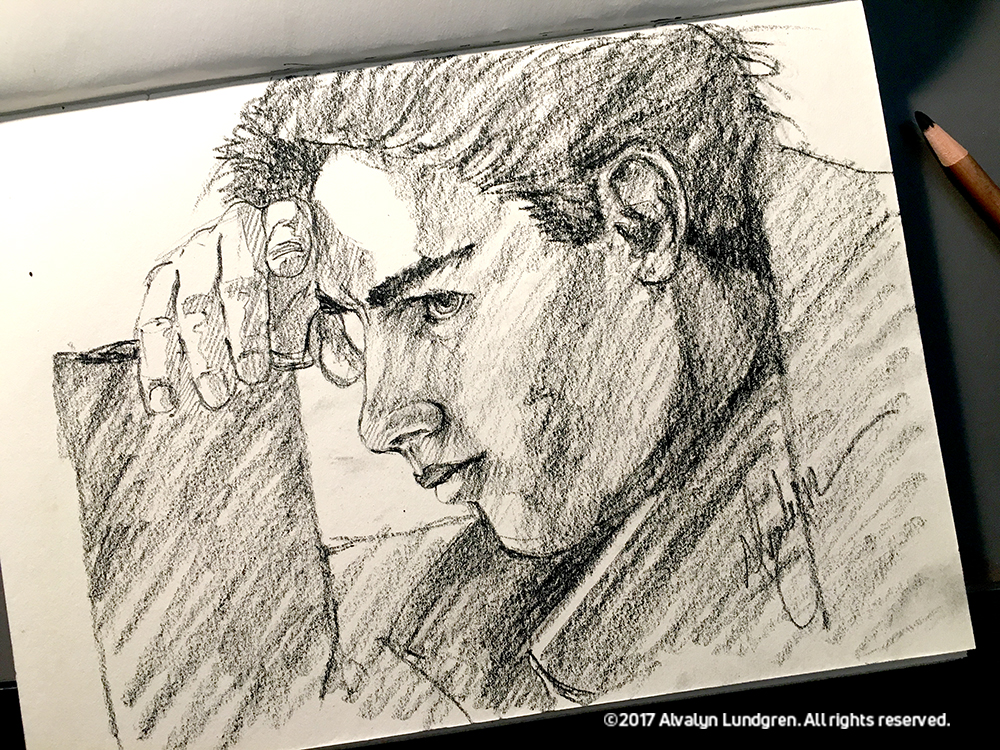 If you mean to draw — to say something, to record an incident, depict a likeness, illustrate a story, or decorate a surface — you need to be intentional. Unless your drawing communicates, it’s a mere doodle. To be a drawing, your mark-making has to say something.

Don’t be timid, aimless, unsure, uncaring, and uncertain. Drawing is intentional. If you mean to draw, don’t doodle.

More on drawing by Alvalyn Lundgren:

Add Energy To Your Drawing With Structural Syntax

Is Drawing a Necessary Design Skill?

On a blank sheet of paper or page, make as many different kinds of marks as you can using a pencil:

Once you fill the page, get another page and use marker to do the same.

Fill up a third page using a ballpoint.

Then, recap your experience. What impressed you? What did you learn? Did mark-making become easier as you kept going?