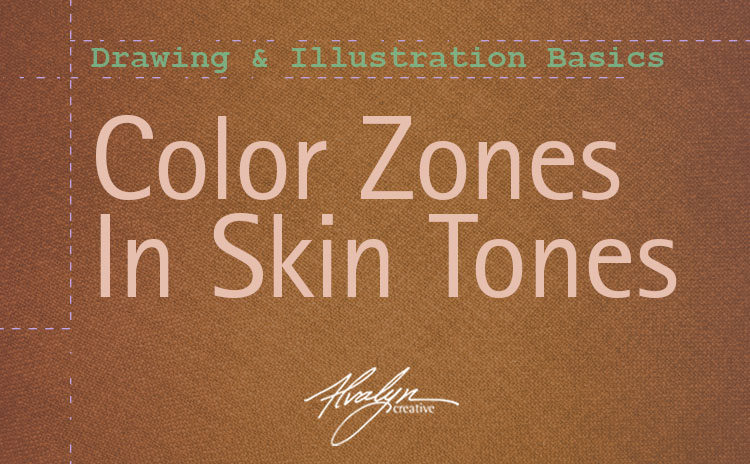 A color zone is an area where one color influences all colors in that area. This is known as color dominance, and it occurs constantly. It is especially noticeable in the human face, which has 3 distinct color zones. We’re used to seeing these color zones, but most people don’t recognize them. The zones are easier to notice on light-skinned people, but all people have them no matter their ethnicity. When painting a portrait in traditional media, or doing digital retouching or painting, working with color zones adds realism and makes for a convincing result.

It is also important to note that color is influence by surrounding colors, lighting conditions and reflected light. Color perception is relative. The same color will appear differently depending upon what’s around it. This is discussed by Josef Albers in his theory of color relativity: The Interaction of Color.

In general, skin tones in the face create 3 distinct color zones: yellow/white, red and blue/blue-green. These areas are clearly depicted in these self-portraits by Alfonse Mucha (more subtly) and Rembrandt Peale: 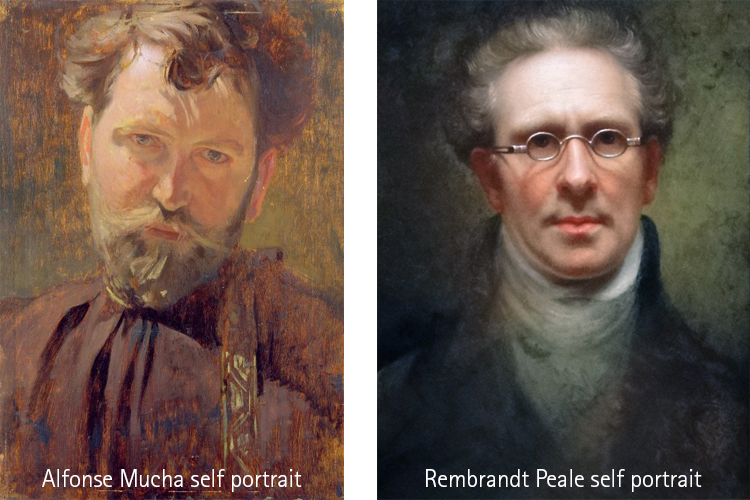 Top of the head, forehead and brow area are yellow or even white. The skin is thinner in this area and contains less capillaries.

Cheeks and nose are red. This is the fleshiest part of the face and contains more blood supply which results in those rosy tones.

Mouth, chin and jaw are blue or blue-green. This is the zone that’s most often affected by reflected light and will be influenced by color that bouncing off clothing and other surfaces. In men, because of the beard area on the jawline, the jock in this area can appear quite blue. And in women it’s an area that will cool and neutralize. Since men don’t wear make-up, these zones are easier to notice. On bearded men, you can incorporate the coolness into the beard, applying the color zones to the face and hair that frame it.

You don’t have to use highly saturated colors when “zoning” a portrait. Be subtle with your mixing. 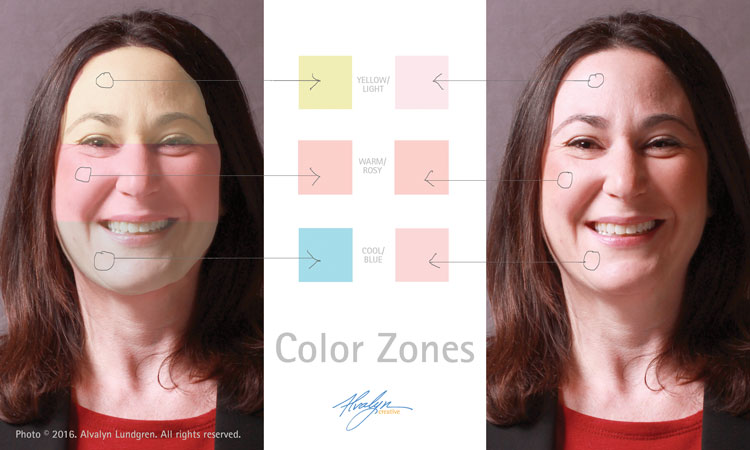 Color in light and shadow areas

Another consideration when mixing color for flesh tones is the quality of light. Under a warm light, shadows will appear cool. In cool light, they appear warm. It’s a complementary relationship.

If you depict your subject underneath the cool light, the light areas of the face will tweak cooler and the shadows warmer. So instead of mixing yellow ochre and cadmium red for a flesh tone in light under cool light you might want to mix a cooler yellow, perhaps a raw sienna, and use warmer earth tones (browns) and in the shadow areas.

Color is a property of light. Our perception of colors on surfaces is always affected by what the light is doing. Color temperature — warm or cool — is relative to the overall color palette. The very suggestion of coolness in a shadow placed next to a warm color in a direct light area is all that’s necessary. You do not need to force the issue or go overboard with over-saturation.  Very often, you can create a shadow by using a cooler color in the same hue family. So you can use in alizarin crimson to depict a shadow on a surface that appears warm red in direct light.

We see color on surfaces because light is being reflected. The reflected light will be cool in character depending upon the color of the surface it’s bouncing from. If a person is wearing a yellow shirt, yellow light is going to affect the color that we perceive along the jawline which receives the yellow light.

Use color to turn form.

On facial planes facing the viewer colors will appear more intense, and color of facial planes that are turning away from the viewer will be less intense. Because intense color advances and neutralized color recedes, you are able to create the illusion of spatial depth.

To summarize, the colors you apply when painting a portrait involve 3 issues:

These color tips maybe applied to any skin tone, light or dark, but are more easily seen on Caucasian skin.

Think about them the next time you are painting a likeness or editing in Photoshop.

A final tip: Keep your color zone changes subtle, or you may end up creating an interesting-looking alien.