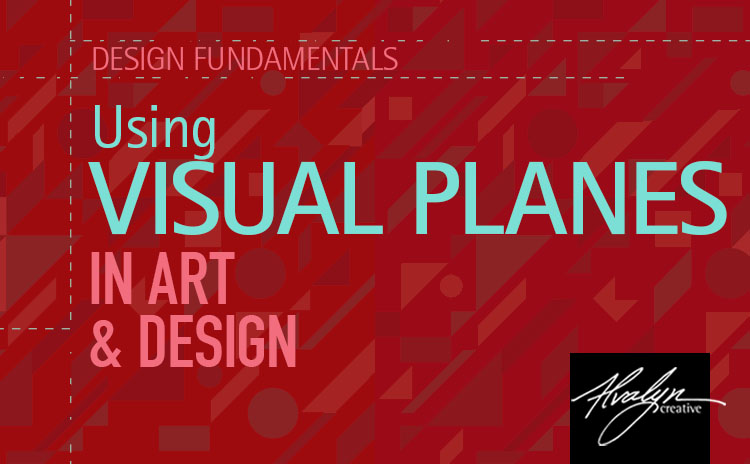 Planes are probably one of the least known formal elements of design outside of the classroom, but understanding what they are and how they’re used is crucial for anyone engaged in creating visual art and design. Anything that we see and use that has 2-dimensions, whether it’s a page in a notebook, a TV screen or a browser window is 2-dimensional.

Some background on formal design elements

Among the formal elements of visual art and design (which covers graphic design, illustration, photography and fine art among other disciplines) are these 4 conceptual elements:

By formal we mean that something is related to form, which is the total outward appearance of a thing. By conceptual we mean that the element does not physically exist but we understand it as being present. In other words, we perceive it but don’t actually see it. It’s implied. 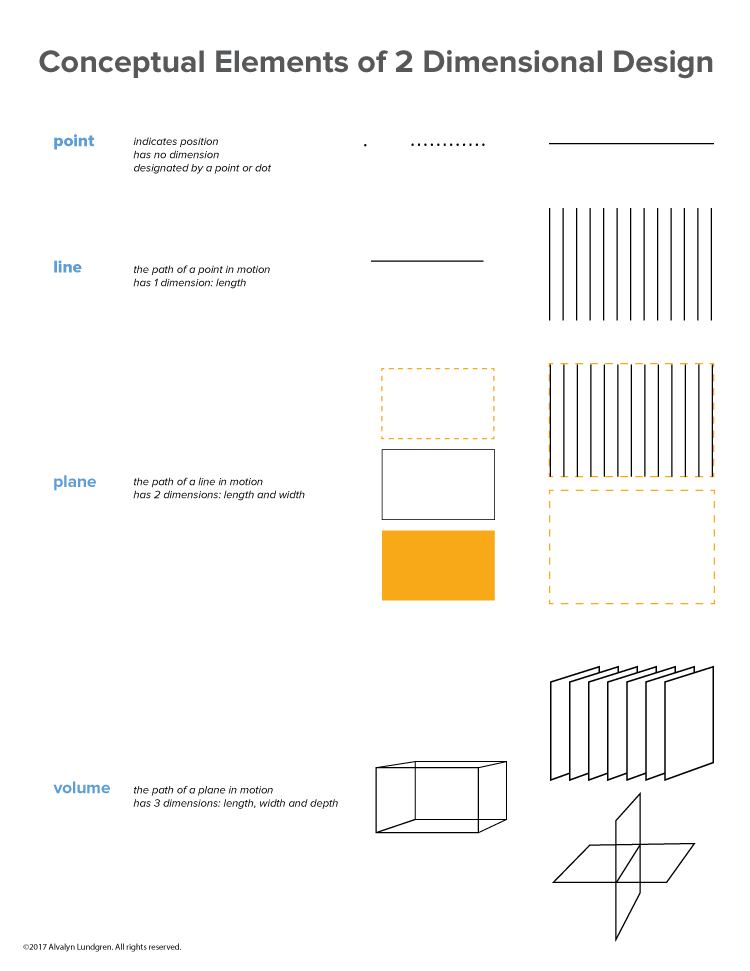 Shape is a visually defined or designated area that has two dimensions height and width. That means it is a plane with a defined edge. It is a formal element of design but it’s not conceptual.

Form is a visually defined area that has three dimensions. Form has volume, and is the 3-dimensional expression of shape. A form is the total of all its shapes. A cube is the 3-dimensional expression of the square. A cube has 6 sides — each one square or rectangular (compressed from a square). A sphere is the volume that relates to the circle, and a pyramid is the volumetric expression of the triangle — a flat shape. Any form can be sliced up in any direction into a series of planes. With the exception of the sphere — which has no planes — the shape of the form changes depending upon our point of view.

So what is a plane? It is a conceptual area having both length and width but no depth. So even in three dimensions planes are two-dimensional. The depth of a plane is so minimal in relation to the length and the width that we consider it to not exist.

Plane is the same concept in 2-dimensional and three dimensional space.

Planes function in both 2 dimensions and 3 dimensions. When you draw or paint, you’re working 2-dimensionally on a plane — the paper, board, tablet or canvas surface. To create the illusion of volume in 2 dimensions you need to create the understanding of conceptual planes: foreground, midground and background.

A three dimensional volume is made of a series of planes. One of the easiest ways we can understand the idea of a plane in three dimensions is with a traditional book. Each page in the book is a plane. The page has length and width, and is easily measured in those two dimensions. Sheets of paper are planar forms. The multiplication and repetition of these planar forms creates the volume of the book. Each sheet of paper in the book sits on a different plane. 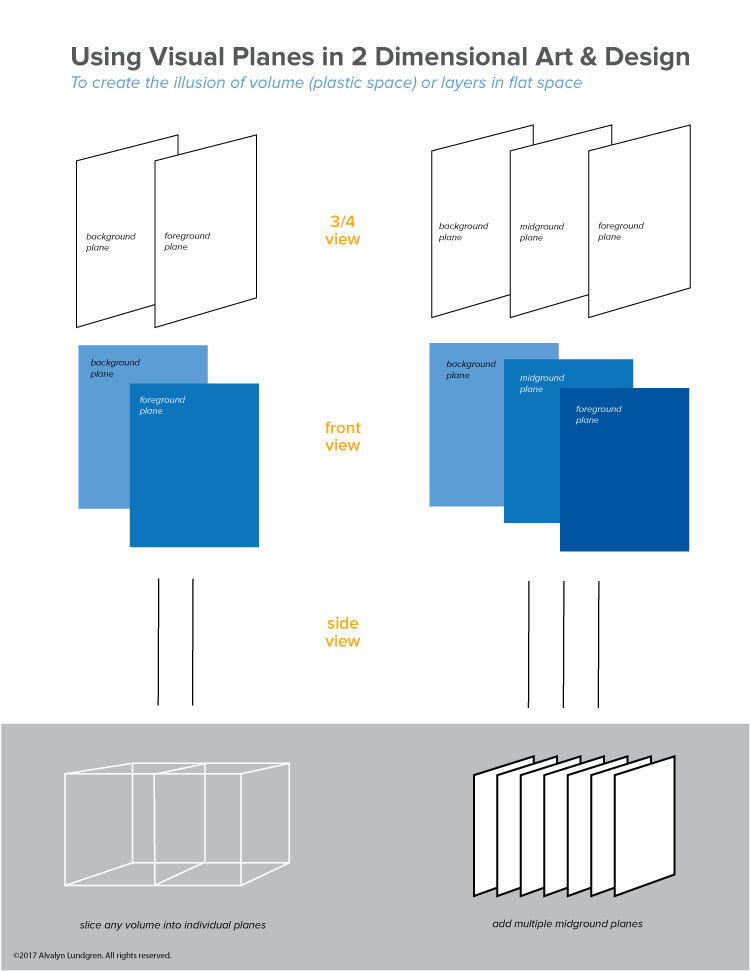 When creating art and design, the first thing we need to know is the dimension of the space we are working with. That space will be either volumetric or flat.

In creating the illusion of volume in flat space (2-dimensional space) we create a series of visual planes. The foreground plane is where things exist that are closest to us in space. The background plane is whatever is in the distance. And then we have one or more midground planes.

To create the illusion of volume we place things on different visual planes. Planes work with structure to form composition.

Decorative space emphasizes its own 2-dimensionality. It is not attempting to create the illusion of volume. Decorative space, however, can represent a sense of visual depth by how the shapes in the design are arranged. A basic stripe pattern in which the stripes are equal in size will not create a sense of depth. When the stripes are different in width, a perception of figure-ground exists. Figure sits in front of ground, and that is the most basic expression of spatial depth.

Surface pattern emphasizes two dimensions, but when figure-ground relationships are present, or the designer uses layering, depth is achieved.

Can you identify the 6 visual planes in this photograph? In addition to the foreground and background planes, there are 4 midground planes. 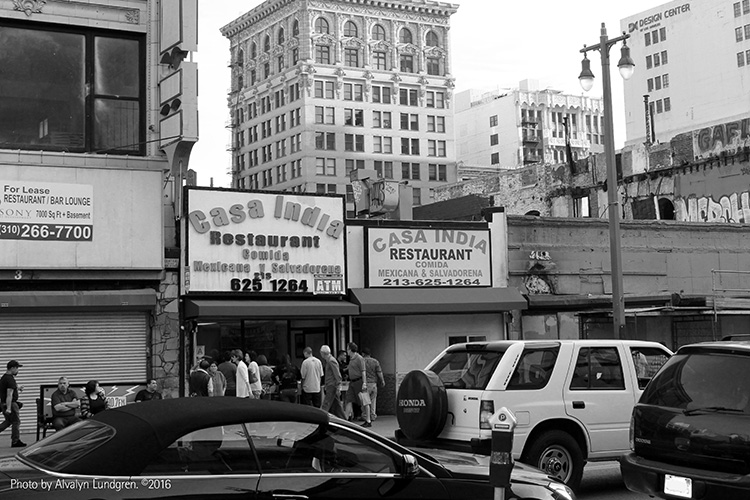 This website stores cookies on your computer. These cookies are used to collect information about how you interact with our website and allow us to remember you. We use this information in order to improve and customize your browsing experience and for analytics and metrics about our visitors both on this website and other media. If you decline, your information won’t be tracked when you visit this website. A single cookie will be used in your browser to remember your preference not to be tracked.AcceptDeclinePrivacy policy