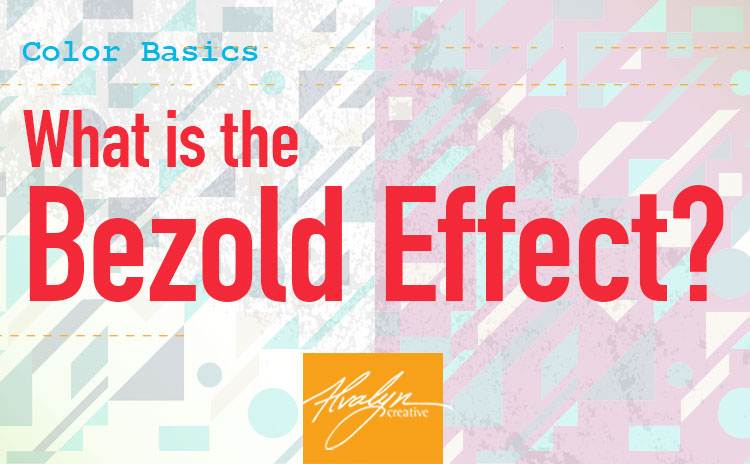 Even if you’ve worked with it for years — on screen or on paper — you will always be in a learning mode when it comes to color. It was about 15 years after I had completed my basic and advanced color theory courses that I first became aware of a visual principle known as the Bezold Effect. Now, this perception is part of seeing things. We encounter this and other visual effects every waking hour. It’s in defining the many principles and elements of design that we can begin to work with them effectively.

What is the Bezold Effect?

There is a special kind of optical mixture, the Bezold Effect, named after its discoverer, Wilhelm von Bezold (1837–1907). He recognized this effect when searching for a method through which he could change the color combinations of his rug designs entirely by adding or changing 1 color only. Apparently, there is so far no clear recognition of the optical-perceptual conditions involved.

In fact, Albers’ theory of color relativity can be considered an expansion on the Bezold Effect principle. And Albers’ colleague, Johannes Itten, reframed the principle in identifying simultaneous contrast.

The Behold Effect is simply the fact that the substitution of a single color causes every other color in the design to shift in relationships. Changing just one color in a design changes the entire design in composition, personality, spatial perception and weight. When one color is changed, relationships between all colors in the design are altered. It is important to understand that the color relationships do not change evenly. Some colors will appear slightly lighter, or slightly darker, while others will appear significantly darker or lighter, or more saturated, or desaturated.

Here is an example of this change by one of my students. The warm yellow in the left design has been changed to a brown (a mixture of red and green). The only change made was the color change. So let’s take a look at how the design differs  due to the color change. Meet Pattern A and Pattern B: 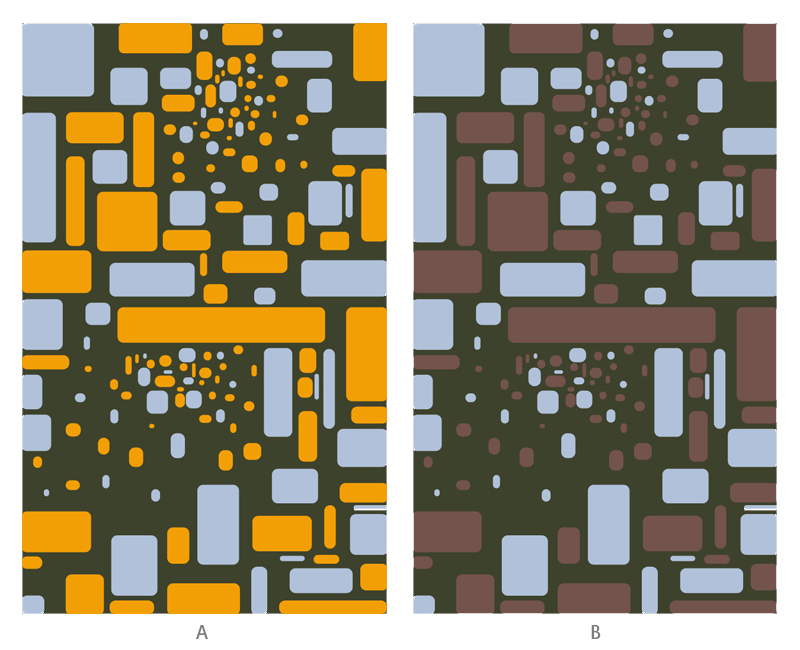 Intensity: Pattern A has a more obvious spatial depth. The saturated yellow is thrown forward by the olive green background. The desaturated blue also advances toward us, and competes for our attention with the yellow.

Value: In Pattern A, the blue and the yellow are about equal in value (the same degree of lightness), so both colors advance to the same degree in front of the dark background. In Pattern B, the brown is not much lighter in value than the olive background, and so sits in front of the background but does not come forward very far. The blue shapes come forward on their own because they are much lighter than the other 2 colors in the design. The first color we see is the blue.

Pattern B is overall darker than A, and therefore feels  heavier.

Energy: Pattern A is more active because of the saturation and values which advance toward us. Pattern B is passive in comparison. There are no saturated colors. The brown floats, but does not dance like the yellow in A.

Color dynamics: Green is the most stable of all the hues, sitting mid-ground and neither advancing nor receding. So green in most of its expressions is a static color, and helps to stabilize a design.

Simultaneous contrast: Notice also that the blue shapes in both designs have a violet twinge to them. This is due to the simultaneous contrast effect of the olive green. Red is the complement of green. The after-image of green is red. So in the presence of green, colors will take on a redness.

How can you use the Bezold Effect in art and design?

Unless you are designing patterns specifically, you may never create direct variations such as the examples above. But you will design to communicate a mood, to create hierarchy, to create deep, flat and layered space, and to create variations on a theme, such as you see in a line of related product packaging. The idea is to exploit the Bezold Effect to get the desired effect:

If you want a lot of energy in a design, do some color substitutions until you achieve the amount of activity you want.

If you want to balance large areas of dark, heavy colors, use a small amount of bright and light color.

If you want to focus attention on particular element in your design, use a contrasting color that also contrasts in value and in saturation.

Further Reading (these are books, not web sites)